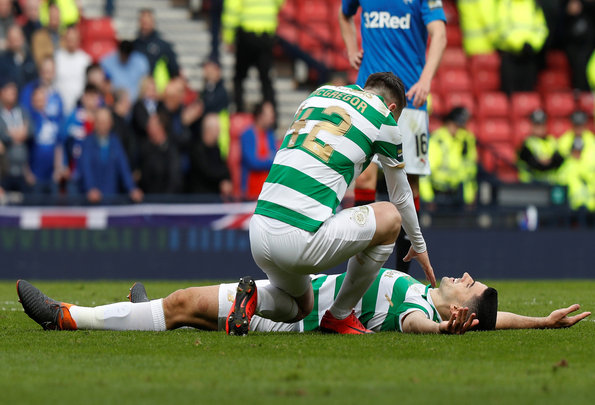 Celtic fans on social media have massive praised Tom Rogic for his performance in the Scottish Cup semi-final against Rangers, which ended 4-0 to the Hoops.

The 25-year-old gave the Bhoys the lead in the match, which was third goal of the season against the Hoops’ bitter rivals, and unsurprisingly fans were delighted with the Australian’s performance.

The midfielder dominated the game for large spells, his movement finding plenty of room and causing the Ibrox side all kinds of problems which they just could not deal with.

With Rogic’s contract set to run out at the end of next season, some fans have taken the opportunity to plead for the Hoops board to give the player a new deal, with one fan wanting the player to sign a ‘lifetime contract’.

Rogic was replaced on the hour mark and received a standing ovation from Hoops fans after another dominant display against the Gers.

Here are some of the best reactions from Twitter to Rogic’s performance:

Never let us down yet Rogic get in 🍀🍀🍀

Whatever Rogic wants in his contract give it to him!!

After another good performance in a big game, the clamour will be huge from the Hoops support to get the Australian tied down on a new deal, as he has once again proved that he is one of the best players in the Scottish game.

In other Celtic news, fans are upset that Scott Bain didn’t start against Rangers