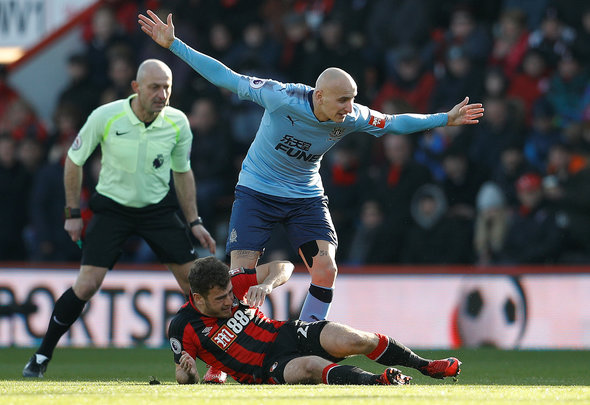 Newcastle United fans have taken to social media to rave over the performance of midfield maestro Jonjo Shelvey for his first half performance against Bournemouth on Saturday.
The Magpies ended their two week break without football with a trip to the south coast, having pulled off a stunning 1-0 win over Manchester United at St James’ Park in their last outing.
Rafael Benitez’s men were looking to make it two wins on the bounce and climb further up the Premier League table after being dragged into the relegation zone a fortnight ago, and they made the ideal start against the Cherries with Dwight Gayle slotting home after 17 minutes to give the visitors the lead, converting Matt Ritchie’s cross against his former side.
However it was the vision and execution of the pass from Shelvey to Ritchie which had the Toon Army purring on Twitter, and many supporters stated that he was running the show with his talent in the centre of the park.
Here, Football Insider has rounded up a selection of the supporters’ best tweets:
https://twitter.com/EthanJames1704/status/967419445185597441
https://twitter.com/jayrcee91/status/967419357797277696
https://twitter.com/EmperorArtist/status/967419341963776006
https://twitter.com/_ck248_/status/967419317284372480

Shelvey is picking out runners with ease over the top

My opinion of Shelvey is changing, worldie pass for Ritchie #nufc

Shelvey is having a great half so far

The Magpies know that victory against Eddie Howe and his men would see them leapfrog the Cherries in the table as a result of goal difference, as they sat three points and three places behind them before kick off.
In other Newcastle United transfer news, Rafa Benitez has revealed talks which fans will love after transfer claims.