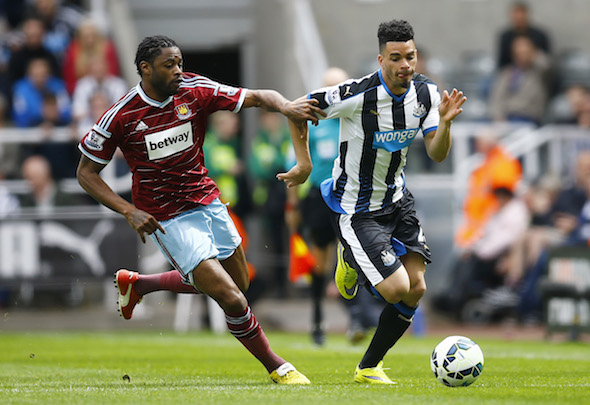 Newcastle confirmed on Friday that Emmanuel Riviere become the second striker to be sold by the club this summer – and fans have shown on Twitter their delight at seeing the back of the Frenchman.

The Magpies announced on their official Twitter account on Friday morning that Riviere, 27, has agreed terms with Ligue 1 side FC Metz, where he has now penned a two-year deal.

CONFIRMED: Emmanuel Rivière has completed a permanent switch to @FCMetz.

In three years on the books at St. James’ Park, Riviere scored just three goals in 31 appearances across all competitions and was shipped out on loan to Osasuna last season in La Liga, where his form failed to improve.

He didn’t manage to find the net in 17 total appearances in Spain, but now it is on the former Monaco striker to find his form back in his home nation with Metz.

One fan even joked that relegation is now “confirmed” for the club with Riviere gone.

At least Rafa will have another £23.42 and a packet of wine gums in his transfer kitty to play with.

Forgot he was still with us. God we've had some terrible players recently… and still haven't signed anyone who makes us better imo…

Most exciting Tweet of this window for @NUFC fans.. 😍😂

Thank god, now him and de jong gone might free up two more signing for us

Worst striker ever at NUFC. In fact not a striker at all

Riviere is the second striker to be sold from St. James’ Park this summer after Nottingham Forest signed Daryl Murphy while Sammy Ameobi also left on a free transfer.

Joselu, Dwight Gayle and Aleksandar Mitrovic remain to be Rafa Benitez’s main options to lead the attack this season, but it remains to be seen what the future holds for the Serbian international with the Chronicle reporting that teams have tabled bids for him recently.

In other Newcastle news, this 25-year-old looks to have made his final appearance for the club with teams circling him for his signature.