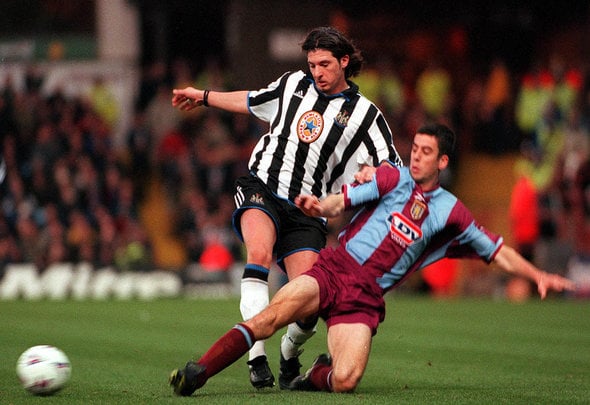 Former Newcastle United defender Alessandro Pistone has blamed his refusal to drink alcohol as well as the English weather for his failure to impress on Tyneside.

The Italian joined the Magpies as a 22-year-old from Inter Milan back in 1997, but struggled to have the desired impact under then-manager Kenny Dalglish, who was sacked during the full back’s second season at St James’ Park.

Pistone found himself outcast by new manager Ruud Gullit, who made the future Everton man train with the reserve side, and was not given a squad number before being loaned out to Italian side Venezia for a short-term spell.

After Gullit’s departure, Pistone found himself back among the first team under Sir Bobby Robson, but injuries plagued him and he found playing time difficult to come by.

Speaking of his time in the north east, Pistone, who has been dubbed a flop during his time with the Magpies, has shockingly blamed the weather and his teetotalism for his failure to settle in with the rest of the squad at the club.

In an interview with website Planet Football, he said: “Living there was not easy for me. It was cold, rainy and windy most of the time.

“I didn’t speak English and I drunk, and still drink, only water, so even the pubs were not the best places for me.

“It was OK, but I never felt part of the group. Weather apart, it was beautiful. Newcastle is a very nice city, with clubs, pubs and restaurants. It’s a university’s city so the lifestyle was good for a 22-year-old guy.”

The defender made a total of 58 appearances and scored a solitary goal across all competitions for the Magpies, including starting in the 1998 FA Cup final defeat to Arsenal, before joining Everton in 2000 where he went on to turn out 108 times for the Toffees.

In other Newcastle United transfer news, a trio of Spanish sides are lining up a move for this star for the Magpies.