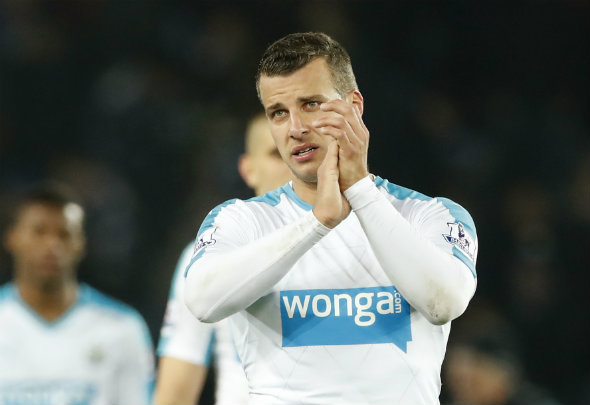 Newcastle legend Steven Taylor is preparing for an ‘amazing’ trip to the White House after joining MLS Cup winners Portland.

The veteran defender has joined former Premier League star Liam Ridgewell at the Timbers in the current transfer window.

Taylor will now the rest of the Portland squad on the trip to the White House as the US government reward them for winning the MLS Cup last season.

“I’ve got my suit all measured up,” Taylor told the Telegraph. “To get the opportunity is amazing. I wake up a very happy man right now.”

Boyhood Newcastle fan Taylor joined the Tyneside club as a nine-year-old and he went on to make 268 first-team appearances for the club over a 13-year period.

He decided to leave the north east club last month after his contract expired, although the centre-back revealed that he was offered a pay-as-you-play contract extension by the Championship club.

Taylor told the Telegraph: “At the end of the season, I spoke to Lee Charnley and they offered me a one-year extension on a pay-as-you-play basis but that didn’t give me a buzz.

“They couldn’t have given me the security I wanted but the Portland Timbers bent over backwards [to get me] and gave me that loving feeling.

“It’s a new lease of life for me out here, I wake up every morning in the sunshine and it makes me feel even better. I’ve got a buzz back, my happy feet back.

“I’m just feeling good again. Being out here and training day in and day out, there is constant treatment for me and I just can’t wait to get started.”

The centre-back scored 15 goals during his time at St James Park, but injuries marred the latter part of his Newcastle career.

A versatile defender, Taylor was out for up to seven months last season before returning in February as he was unable to prevent the club from getting relegated to the second-tier of English football.

Newcastle supporters will have fond memories of the club’s fan favourite and will wish him all the best as he embarks on a new chapter in his career.

Despite the loss of centre-back Taylor, Rafa Benitez has added Blackburn defender Grant Hanley who joined for a £5.5million fee.

In the latest Newcastle transfer news, the club have agreed terms with an emerging star as the paperwork is finalised.