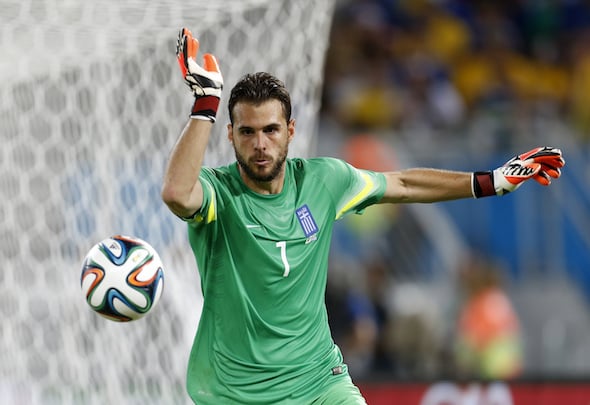 Newcastle have made a late attempt to sign Udinese’s Greek goalkeeper Orestis Karnezis, according to a report.

The Daily Mail have claimed on their live transfer blog (Monday, 6.50pm) that the Magpies have approached the Serie A side about taking the 32-year-old stopper with just three days remaining of the summer window.

It is said that Karnezis is available to leave the Udine-based club this summer, but the Italian’s would favour a permanent move, rather than a loan.

Newcastle, meanwhile are on the search for a new goalkeeper and it is said that manager Rafa Benitez is willing to offload both Tim Krul and Karl Darlow in order to fund a new signing.

Each of Jeroen Zoet from PSV Eindhoven, Crystal Palace’s Wayne Hennessey, Napoli’s Pepe Reina and Adrian from West Ham are said in the Mail report to have been discussed by the north east giants.

However, 42-time Greece international Karnezis could be the one to make the move following the Mail report.

Karnezis is clearly surplus to requirements at Udinese with his last appearance coming all the way back in May. In the last season he conceded a massive 45 goals from 33 matches, as well as keeping just eight clean sheets. Those stats would suggest that Karnezis is not the answer for Newcastle, who are in desperate of a new stopper following their promotion to the Premier League. However, the Greek stopper is unlikely to be any better than last summer’s signing Matz Sels and therefore if it is Karnezis that the Magpies go for then he would likely be a waste of money.

In other Newcastle transfer news, the Magpies are also plotting a late swoop for a international striker with a prolific record.