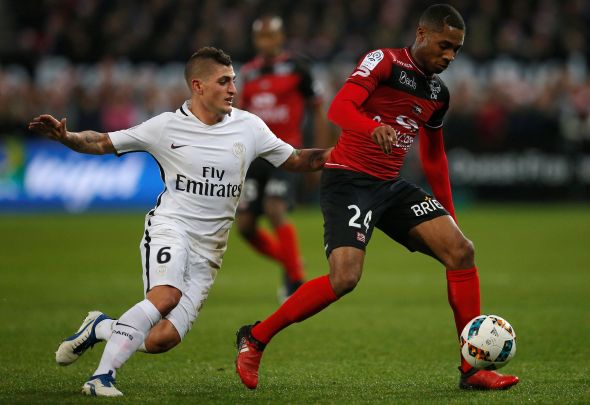 Newcastle have placed Guingamp winger Marcus Coco at the top of their transfer shortlist ahead of the summer window, according to a report.

The Sun claim in Sunday’s paper (page 68) that 20-year-old Coco was a target for the Toon last summer, and manager Rafa Benitez is ready to table a bid of £10million this summer.

It is believed that Stoke and Southampton are also keeping tabs on Coco, with Saints manager Claude Puel a fan of Coco from his time in charge of Ligue 1 outfit Nice.

Coco, who is known for his blistering pace and ability to drift past an opponent when in possession, is expected to leave Guingamp in the summer after starring in their side this term.

The six-time France Under-21 international has scored four goals this season despite his tender age, as well as providing two assists during 27 league outings.

Coco burst onto the scene during Guingamp’s away victory at Ligue 1 giants Lyon, where he scored a sublime brace from left wing during his side’s eye-catching 3-1 triumph.

It remains to be seen if Coco will leave his boyhood club in the summer, as he has more than three years remaining on his current deal.

Possessing a huge amount of potential, Coco could prove to be a top signing at St. James’ Park as Benitez looks to bolster his options out wide in the summer ahead of a likely Premier League campaign in 2017-18. Coco has shone for his side this season, with Newcastle known for their success in the transfer market when it comes to French players. The likes of Moussa Sissoko, Yohan Cabaye and Yoann Gouffran have all proved to be top signings when moving to Tyneside from Ligue 1, and Benitez will be hoping Coco can add his name to that list. However, his arrival is likely to spell the end for Gouffran, whose contract expires in the summer.

In other Newcastle transfer news, the Toon have thrown their hat into the ring for this proven Premier League goalscorer.