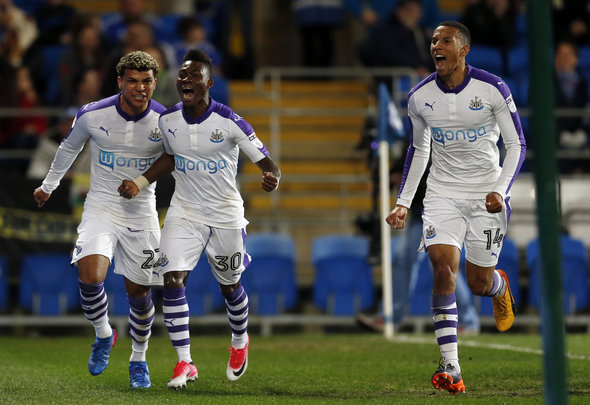 Newcastle have until the end of Sunday if they wish to activate an option-to-buy clause in Christian Atsu’s loan contract, according to a report.

The Newcastle Chronicle claims that the Magpies have first option to sign the 25-year-old from Premier League champions Chelsea if he agrees to a permanent switch.

It is understood that the Tynesiders will have to splash out £6.5million to sign the attacker, who has been in great form during his season-long loan spell in Rafa Benitez’s side.

However if the Championship title winners fail to make a bid for Atsu, other clubs can come in to sign the 53-times Ghanaian international.

Atsu made 35 appearances in all competitions for Newcastle during his loan spell, scoring five goals and supplying three assists.

He got off to a slow start at St. James’ Park but as the season progressed he became more and more of a crucial part in Benitez’s plans.

The versatile winger has been at Chelsea since moving from Porto in 2013 but has failed to make a single senior appearance for the club.

Atsu has been sent out on loan to Vitesse, Malaga, Bournemouth and Everton during his stint at Stamford Bridge.

The winger has played well for Newcastle this year but hasn’t provided enough in terms of goals and assists. The Magpies have scored a lot of goals at they secured the Championship title but Atsu only had his hand in eight of them, which for someone who is on loan from Chelsea, isn’t enough. There’s no future for the Ghanaian at Stamford Bridge so he should definitely look for a permanent move in the summer, but it remains to be seen whether he can perform in the Premier League. Benitez will have a lot of money to spend in the summer so he could look for a better option.

In other Newcastle news, Rob Elliot has revealed the Magpies’ secret weapon.