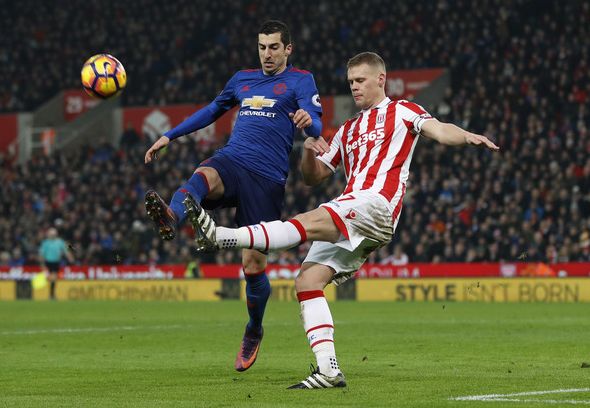 Newcastle could be set to miss out on Stoke City captain Ryan Shawcross as the Potters look to secure him on a new long-term contract, according to reports.

The Independent claimed last month that Newcastle boss Rafa Benitez had made the 29-year-old a summer transfer window priority as he looks to sign proven Premier League talent.

However, the Daily Mail has now claimed that Mark Hughes’ Stoke are set to offer Shawcross a new deal that will see the centre-back remain at the Britannia Stadium well into his thirties.

Shawcross has just over 12 months remaining on his current deal, and delays in meeting at the negotiating table had led to uncertainty over the former Man United defender’s future.

However, the commanding centre-back – said to be settled in the area – could extend his decade-long stay with the Staffordshire club.

Benitez currently has captain Jamaal Lascelles at the back, with Chancel Mbemba, Ciaran Clark and Grant Hanley competing for a place alongside the former Nottingham Forest star.

But after gaining promotion back to the Premier League at the first attempt earlier this season, Benitez is likely to look to strengthen his squad in all areas in order to keep the Toon afloat of a relegation dog fight.

Newcastle must hope that Shawcross has other ideas as to his future. Just because Stole are going to offer a contract, doesn’t necessarily mean that Shawcross will accept it – especially if there’s an attractive offer from Newcastle to consider. Benitez reportedly saw Shawcross as one of his priority summer targets and he’s definitely got the quality Newcastle need to retain their Premier League status. With a huge 287 appearances in the Premier League under his belt, his knowledge of England’s top flight is far greater than any of the Toon’s defenders and would form a top partnership with Lascelles should he brought to Tyneside. The duo would compliment each other, as Lascelles is known for his pace while Shawcross is slow but experienced. The Spaniard must work quickly in order to convince Shawcross to move as combining both Shawcross and Lascelles would make Benitez’s side much more solid.

In other Newcastle transfer news, this 20-year-old has revealed he is considering leaving St. James’ Park ahead of the 2017-18 campaign.