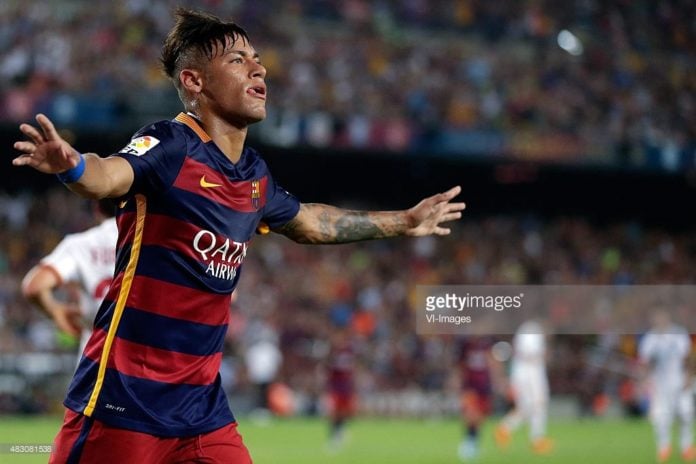 EXCLUSIVE | By Editor
Neymar will demand a contract worth a staggering £500,000-a-week when he opens new contract talks with Barcelona, Football Insider sources understand.

The Brazilian superstar will sit down with Barca officials imminently to discuss extending his current £230,000-a-week deal, which runs until 2018.
Neymar, who has been linked with Manchester United in the past week, wants a huge pay rise that will take him close to team-mate Lionel Messi, who is the world’s best-paid footballer with a contract worth £530,000-a-week before taxes.
Neymar’s current salary is less than half that of Messi. The Brazilian’s contract is set at £6.4million after tax per year, which, given the income tax rate for Spain top earners of 47 per cent, is the equivalent of £230,000-a-week.
The 23-year-old wants an improved deal that will more than double his pay to £500,000-week and will run until 2021. Over six years, the total package he is seeking would be worth an astonishing £156million.
Barcelona have always planned to offer Neymar a new deal in his third year at the club and recognise they will have to offer a massive deal to keep one of their most important players.

The Brazil international has been a huge success since his move from Santos in 2013, scoring 39 goals last season in a Barca front three that, with Messi and Luis Suarez, scored 122 goals. The club won the Treble and Neymar also scored in the Champions League final.
United have not distanced themselves from reports they have targeted a world-record move for Neymar, although the complications of such a transfer would mean any deal is unlikely until next year.
The Brazilian’s camp are likely to use the interest of the Premier League giants as a negotiating tool in discussions with Barcelona.