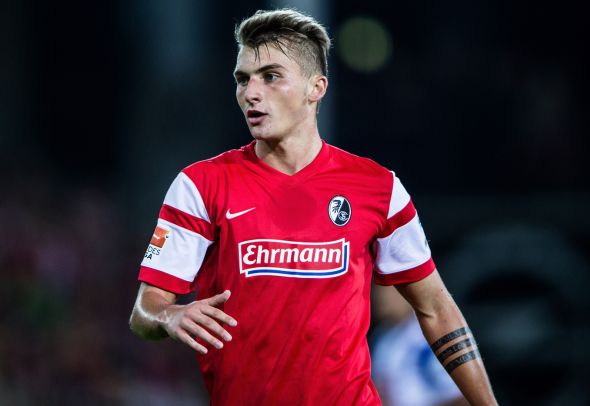 Tottenham are set to rival German giants RB Leipzig for German winger Maximilian Philipp this summer, according to a report.

German outlet Kicker claim Tottenham are interested in bringing the 23-year-old attacking midfielder to north London this summer, after a sublime season in the Bundesliga.

It is believed that RB Leipzig, who are known to target young stars in the transfer window, are also keen to sign the six-time Germany Under-21 international.

Philipp has been in superb form this season, scoring nine goals and adding another five assists during his 26 league and cup appearances.

Known for his blistering pace, Freiburg’s number 26 has proved time and time again that he is able to drift past opponents, whether that be reaching the byline or cutting inside.

Mauricio Pochettino has plenty of options out wide available to him at Spurs, in the likes of Son Heung-Min, Erik Lamela, Georges N’Koudou and Moussa Sissoko.

Philipp has played for Freiburg 87 times since moving to the Schwarzwald-Stadion in 2013, scoring 18 times and turning provider 23 times.

With a contract in Germany until the summer of 2019, it remains to be seen how much Spurs will be forced to part with for Philipp if they were to sign the young attacker.

In a side that has struggled to find the back of the net this season despite sitting in sixth place in the Bundesliga, Philipp has scored almost a quarter of Freiburg’s goals from attacking midfield. With only one league game to play, Philipp has proved he is able to create something out of nothing, with his nine goals proving pivotal in Freiburg’s season which has seen them only manage a total of 41 goals in the league. Showing he is able to find the back of the net against the biggest teams, including Borussia Monchengladbach and Borussia Dortmund, Philipp could be brought to London with the futures of Sissoko and N’Koudou likely to be under scrutiny this summer.

In other Tottenham transfer news, Spurs have tabled an offer for this Champions League right-back.