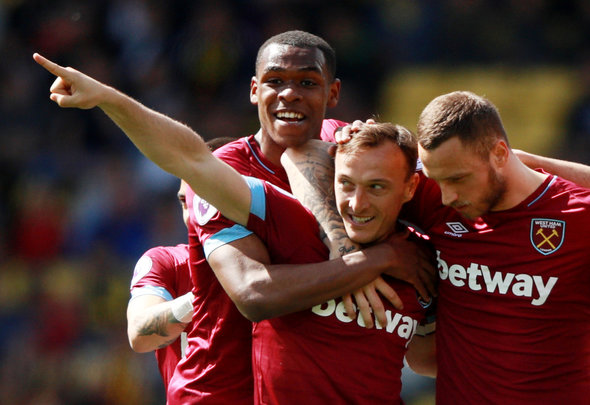 Darren Bent has revealed he was left stunned after seeing West Ham midfielder Mark Noble appear to dive in the Hammers’ 0-0 draw with Aston Villa on Monday.

Speaking exclusively to Football Insider assistant editor Russell Edge, the former Aston Villa and England striker says he did not take the 32-year-old for a player who would try to con the officials and that suggested he should have joined Arthur Masuaku in being shown a red card.

The left-back was handed his marching orders for two yellow cards against the Villans, leaving Manuel Pellegrini’s side to play out the final 23 minutes with 10 men.

However, Bent says that the Irons were lucky not to find themselves down to nine out on the pitch after Noble’s display, insisting that simulation seems very out of character for the West Ham midfielder.

Bent told Football Insider: “There was the one where Noble dives, he’s been booked but he jumps straight back up, he’s clearly not been touched so that could have been a red card as well.

“That shocked me. He is so experienced Mark Noble. If you’d have said about diving and Mark Noble I’d have said no way, it’s impossible, I wouldn’t put those two in the same sentence.

“These things happen sometimes but he got away with one there but I guarantee he won’t do it again.”

Noble has been a mainstay in the Hammers line up this season, playing in all but two of the club’s Premier League fixtures after missing the start of the campaign through injury.

The Irons captain has 470 appearances under his belt for the east Londoners and scored one of his 57 goals against Watford on his first game since returning to the side.

In other West Ham news, Danny Mills has told Football Insider that one Hammers star is hitting “top-six” levels this season.