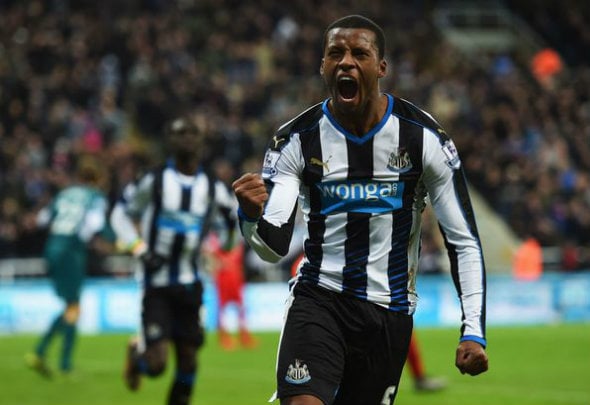 The Holland international had his odds slashed to 8/11 by betting company SkyBet on Monday morning to make a sensational move to Anfield.

The second favourites to land Wijnaldum are Liverpool’s rivals Everton, who are priced at 3/1, while Tottenham have drifted to 7/2.

This comes after the Telegraph claimed on Sunday night the Merseysiders have jumped to the front of the queue to sign Wijnaldum as Jurgen Klopp continues to press ahead with plans to bolster his midfield options.

It is said Newcastle value the Dutch international at £27million but Liverpool are hopeful of striking a deal at around the £20million mark.

Experienced Merseyside journalist Chris Bascombe says negotiations between the two Premier League clubs is ongoing but states “there is even some optimism on Merseyside talks could advance significantly over the next few days in time for the player to join Liverpool’s pre-season tour of North America”.

Klopp’s side head to the United States on Thursday as they step up their pre-season preparations.

Newcastle manager Rafael Benitez has stated that he hopes Wijnaldum will stay at the club despite being heavily linked with a move away.

Tottenham and and Everton are also keen on signing Wijnaldum, who has made it clear that he wants to leave following the club’s relegation to the Championship.

The Holland international moved to the north east of England last summer from PSV Eindhoven for a fee of £14.5million.

The 25-year-old was a shining light in a wretched Premier League campaign for the Tyneside club, scoring 11 goals in the competition.

In other Liverpool transfer news, the club have agreed the terms of a club-record transfer.