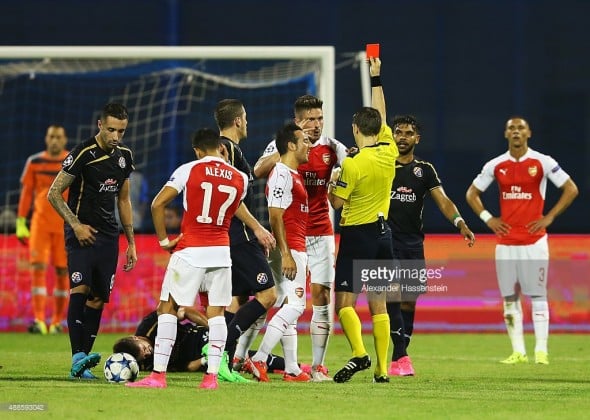 Olivier Giroud is carrying too heavy a burden, Alex Oxlade-Chamberlain lacks end product and other things we learned from Dinamo Zagreb 2 Arsenal 1.
By Arsenal correspondent Tony Hughes
Giroud is becoming a albatross for Wenger’s transfer failures
As the only fit orthodox spearhead available to Arsene Wenger until the new year, and possibly longer, Giroud is becoming a magnet for supporters’ criticism. With every chance missed – and he spurned two very good ones before his 40th minute dismissal for two bookable offences – the over-reliance on him becomes a growing bone of contention. It is little wonder that the France striker said he would have welcomed the arrival of Karim Benzema this summer. It might have reduced Giroud’s game time but it would have also eased the pressure on him. Despite what he says, Wenger is clearly unconvinced by Theo Walcott’s ability to regularly lead the line. When a physical presence is required, the only man Arsenal can turn to is Giroud. Walcott gave the team a lifeline with a late goal following his second-half introduction but the sense remains that he is more effective as an impact player.