Football Insider analyses three of the main talking points from Chelsea’s 1-1 draw with Burnley in the Premier League on Saturday.

There are weaknesses to Chelsea’s game

For much of the season, Chelsea have drawn the plaudits for their incorporation of Antonio Conte’s playing-style. His tactical approach of three central defenders, shielded by central-midfielders N’Golo Kante and Nemanja Matic (with two attacking wing-backs) has worked wonders for his side, helping them establish a comfortable lead at the top of the Premier League. However, it does have its faults – if you can find them – and Burnley made a good effort at exploiting them. Chelsea weren’t at their fluent best, but credit must go to Burnley for the way they set themselves up to challenge Conte’s system. Clarets’ boss Sean Dyche deployed a 4-4-2 system, and the two strikers – Ashley Barnes and Andre Gray – caused considerable problems for Chelsea’s back-three. David Luiz and Gary Cahill were often drawn out of position into the wider areas, allowing one of Burnley’s front-men to expose them in the centre. The mid-game tactical shift changed the complexion of the game, giving Burnley more opportunities to test Chelsea. In the end, it earned Burnley a valuable point, and cost Chelsea two.

One point is no concern

Although Chelsea would have gone into the tie anticipating a 20th league victory of the season, they won’t come away from Turf Moor too disheartened after failing to pick up all three points. Conte’s side did miss a chance to go 12 points clear at the top of the league, but they won’t care too much – 10 points is still a considerable margin. The title race is still theirs to lose, and their momentum was hardly halted with a 1-1 draw. They still have just one league defeat since the 3-0 loss to Arsenal in September, and the Conte train will continue to go steaming on. There were still reasons to be cheerful over their display, but Burnley had a gameplan at home and they executed it very well; particularly after going behind early on to Pedro’s opener. It was an entertaining game, but a draw was probably the fair result on the day.

Conte seemed to anger fans on Twitter by continuing to leave Cesc Fabregas out of his starting XI, instead sticking with 28-year-old Nemanja Matic. However, the performance from the Serbia international was less than convincing, and it gives Conte something to think about in the coming weeks. Matic is the better of the two in his defensive duties, and with Conte’s attack-minded system, that’s what is needed to strike the perfect balance. On the flip side, the creative Fabregas could have had a much bigger influence on proceedings if he was given a little more time on the pitch. He has the ability to cut open defences with one pass, and Chelsea may have needed that one moment of brilliance to break open a stubborn Burnley defence. Matic has been fantastic for Chelsea since returning to the club in 2014, and the critical fans perhaps ignored his influence in previous games before laying into him on Twitter. However, Conte does have a decision to make every week to go for either the solidness of Matic or the creativity of Fabregas. Perhaps today he chose wrong.

In other Chelsea news, here is how the players rated during the clash. 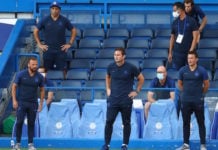