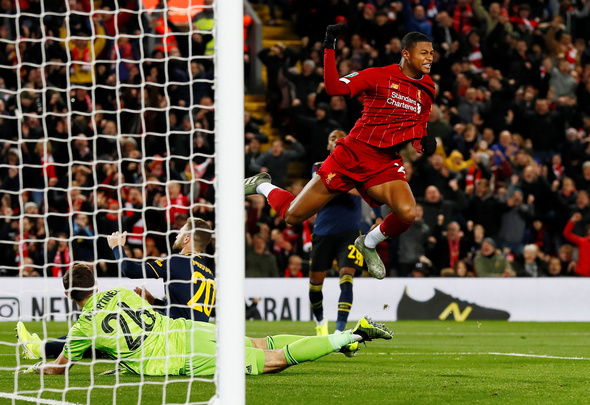 Paul Robinson has revealed he was blown away by the performance of Liverpool youngster Rhian Brewster in the Reds’ League Cup triumph over Arsenal on Wednesday night.

Speaking exclusively to Football Insider assistant editor Russell Edge, the former Tottenham and England goalkeeper says that he was impressed with the 19-year-old’s ability both in possession and off the ball, heralding his maturity for someone so young.

The attacker was making his second appearance of the season against the Gunners in what was an enthralling tie that finished 5-5, Liverpool coming out on top in the penalty shootout.

Robinson singled out the England under-21 international for special praise after the clash, insisting that the Reds have a future talent on their hands.

Asked who had caught his eye in a red shirt, Robinson told Football Insider: “Brewster I thought was outstanding. I really like him.

“I thought for 19-years-old he showed maturity, he was good on and off the ball, I liked his maturity off the ball and he’ll definitely one to watch for the future.”

Wednesday’s start was only Brewster’s second senior appearance for the club since breaking through the youth ranks at Anfield, having also started in the League Cup win over MK Dons earlier this season.

He has impressed at under-23 level for the Reds, his performances helping him pick up four caps for the England under-21s since June.

In other Liverpool news, Football Insider can reveal that a Serie A side are plotting a £10million transfer raid at Anfield.