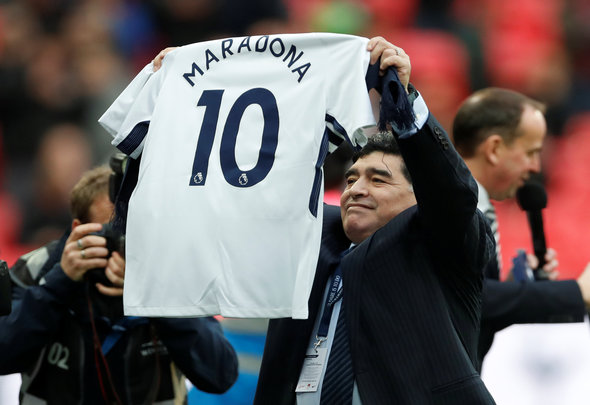 Tottenham icon Ossie Ardiles has revealed that Diego Maradona was thoroughly impressed by Spurs in their 4-1 win over Liverpool at Wembley on Sunday.

Argentina World Cup winning legend Maradona was a guest of honour at the England national stadium at the weekend and joined Spurs chairman Daniel Levy in the director’s box to watch over their convincing win against the Reds.

A Harry Kane double and strikes from Dele Alli and Heung-min Son gave Mauricio Pochettino’s side a stunning three points which moves them level with second-placed Manchester United in the Premier League table.

Speaking on his personal Twitter account after the game, Ardiles explained how pleased Maradona was with this Tottenham performance and recalled the one game where he pulled on the Spurs shirt in a testimonial game in 1986.

“He was very impressed with our performance. He remembered as well when he used our sacred shirt. He signed every autograph, posed for every picture. Love to have had him at Wembley,” said Ardiles.

And… a luxury guest: Diego. He was very impressed with our performance. He remembered as well when He used our sacred shirt. He signed every autograph , posed for every picture. Love to have had him at Wembley. COYS

Maradona played for Tottenham in Ardiles’ testimonial against Inter Milan shortly before the 1986 World Cup in Mexico, in which the former Argentina striker would go on to win by scoring five goals and being crowned as Best Player.

In his playing days, Maradona had spells with Boca Juniors, Barcelona, Napoli and Sevilla before trying his hand at management with Argentina, Al Wasl and currently Al Fujairah.

In other Tottenham news, Spurs fans on Twitter have reacted to Harry Wink’s performance against Liverpool.