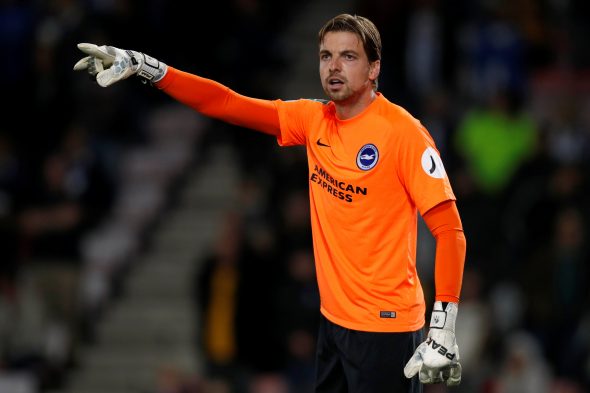 Former Newcastle United goalkeeper Tim Krul has said that the Magpies are well equipped in the goalkeeping department despite his departure.

The Dutch international stopper ended his 12 year stint at St James’ Park after an initial loan deal to Brighton was turned into a permanent move last week.

His departure came after being deemed surplus to requirements at the club by boss Rafael Benitez, which saw him outcast from the first team squad to train with the youth sides.

The 29-year-old was one of two goalkeepers to leave the club over the summer, with Matz Sels heading back to Belgium with Anderlecht on a temporary deal, but Krul insists that Newcastle are still strong between the sticks.

He told the Chronicle: “The goalkeeping situation has never been a problem.

“Rob’s (Elliot) a great goalkeeper, and so is Karl (Darlow), and Freddie’s (Woodman) a great prospect to come up.”

Krul spent most of his year’s on Tyneside vying for a spot in the starting XI, making 185 appearances following his arrival from Dutch side ADO Den Haag.

He also earned himself eight caps for his country, although a serious knee injury picked up while on international duty in 2015 saw him miss over a year’s worth of football.

He never made another appearance for the Magpies following his layoff, as he had loan spells at Ajax and AZ Alkmaar, before departing for the Seagulls this summer.

However Krul insists that he is proud of his time on Tyneside, and says he has still got much to prove as a goalkeeper.

“I’m fortunate that I was 17 when I came and I played a lot of games for Newcastle at the highest level and for my country,” he told the Chronicle.

“I’m 29. It’s still young for a goalkeeper. I’m fitter than I’ve ever been. I’m really looking forward to stepping ahead again.”

Krul watched from the substitute’s bench as Mathew Ryan starred in goal against Newcastle on Sunday, helping his side secure a 1-0 victory over their fellow promoted side.

In other Newcastle United news, Peter Beardsley has been praising the attitude of these outcasts.