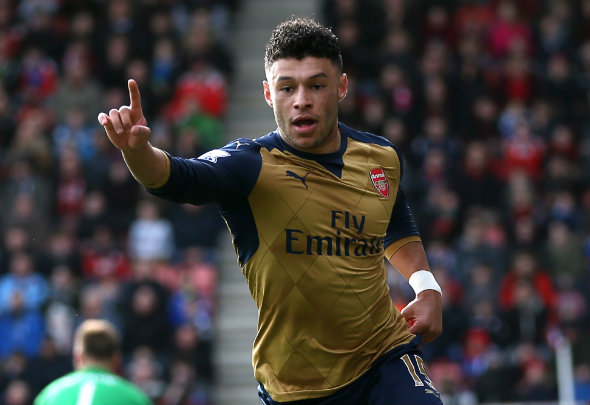 Alex Oxlade-Chamberlain revealed on his Twitter page that he is ready for Arsenal’s upcoming Champions League clash.

The Gunners face Bulgarian side Ludogorets away and recorded a comfortable 6-0 win in the reverse fixture, with Oxlade-Chamberlain scoring one goal and assisting once in the group stage victory.

The 23-year-old is currently enjoying some good form and has started the club’s last two matches.

The midfielder scored two goals against Reading in the EFL Cup fourth-round, before grabbing an assist in the 4-1 win against Sunderland on Saturday.

Oxlade-Chamberlain has explained that he is ready for the European encounter and the Arsenal squad are in Bulgaria preparing.

“In Sofia, ready for the match vs Ludogorets tomorrow night,” Oxlade-Chamberlain wrote on his personal Twitter account.

Oxlade-Chamberlain is enjoying a good run in the first-team and will hope to retain his place against Ludogorets.

The winger is competing in a highly competitive squad alongside the likes of Alex Iwobi, Alexis Sanchez, Lucas Perez and the currently injured Theo Walcott.

He has completed 90 minutes in just 13 of his appearances this campaign, but has scored an impressive five goals and set-up three assists in that time.

Arsenal could make changes to the side with manager Arsene Wenger aware of the crucial Premier League match with rivals Tottenham on Sunday.

In other Arsenal news, Wenger has claimed the club need to do two things to win the Premier League.