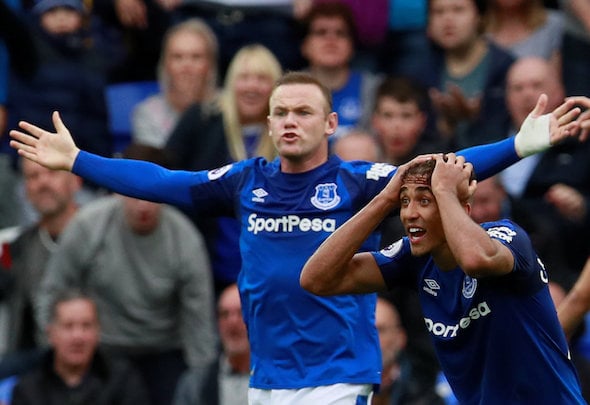 The 20-year-old has featured in every single Premier League game so far this season and he has contributed with four goals and three assists in all competitions.

The forward found himself on the scoresheet in midweek but the Toffees were unable to progress to the Carabao Cup quarter-finals after losing 2-1 against Chelsea in midweek at Stamford Bridge.

The youngster has been given more game time this season after the club sold last season’s top goalscorer Romelu Lukaku to Manchester United in the summer.

Speaking to the Liverpool Echo, Rooney is confident that Calvert-Lewin can become an important player for the club in the future.

“I think what people don’t realise is how strong he is,” he said.

“He’s tall and thin but so strong and I think defenders are starting to realise that now and be a bit more physical with him, and that’s where he can use his pace to his advantage.

“If they get too tight to him then he’s got the speed to get away from them.

“I think he is still learning the game – knowing when to hold the ball up or knowing the right time to run in behind or to come short to feet – but [when he has that] he’ll be a big player for us.”

Despite his impressive start, Calvert-Lewin has failed to score a single goal in the league this season.

Rooney and fellow striker Oumar Niasse are the only Everton players to find themselves on the scoresheet in the top-flight so far.

Both forwards scored in last weekend’s fixture against Arsenal but Everton suffered a humbling 5-2 defeat at Goodison Park.

The result saw Ronald Koeman receive the sack and David Unsworth will be in charge of the Toffees for their upcoming Premier League against Leicester City on Sunday afternoon.

In other Everton news, Liverpool legend Graeme Souness has claimed who the next Toffees boss should be.