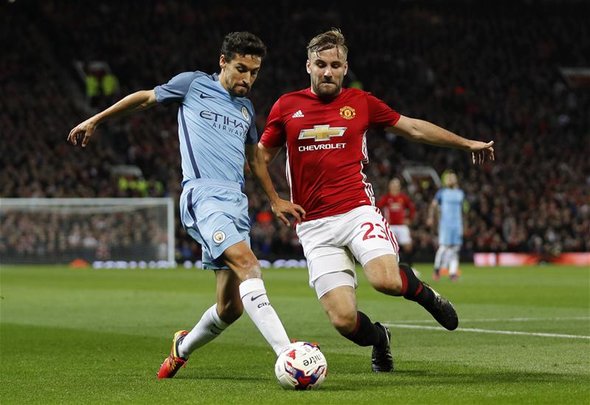 Out in the cold Manchester United left-back Luke Shaw would be the perfect replacement for Leighton Baines at Everton and the Toffees must look to sign him in the summer.

The 21-year-old has played just seven times in the Premier League under Jose Mourinho this season after recovering from a double leg fracture last season.

The stubborn Portuguese boss has seemingly favoured playing one of Matteo Darmian, Marcos Rojo or Daley Blind in the left-back position and Shaw has failed to make the last five Premier League  squads, while he was left on the bench for Sunday’s FA Cup match against Blackburn.

It has now been revealed that the once promising England international has been left out of the Red Devils’ Europa League squad against Saint-Etienne on Wednesday and it is now felt that his future is better off elsewhere.

Now, all of this could have come at the perfect time for Everton, who will be looking at replacing 32-year-old Baines in the near future as his career winds down.

The former England international has been a fantastic servant for the Merseyside club in his nine years, but at his age Shaw would be seen with both the immediate and long-term futures in mind.

The Manchester United man shone at Southampton and was selected as the left-back in the PFA Team of the Year for the 2013-14 campaign alongside being on the six-man shortlist for the PFA Young Player of the Year award before becoming the most expensive teenager in the world in a £30million switch.

Current Everton boss Ronald Koeman just missed him on the south coast as he joined in the same summer that Shaw left, but he could strike another deal with United like the Morgan Schneiderlin one to capture another quality player for his team.

In other Everton transfer news, the Toffees are looking to reignite their interest in this Premier League forward.