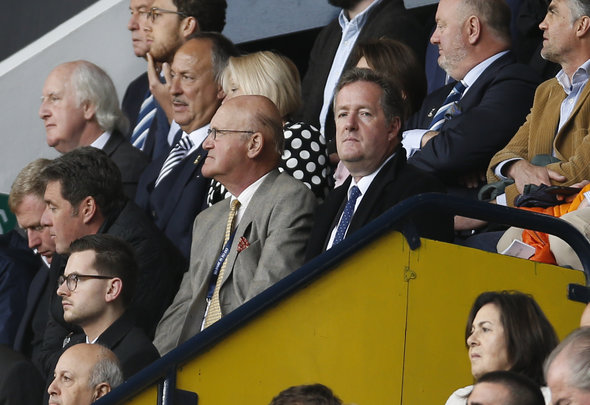 Outspoken TV personality Piers Morgan has not only claimed that Tottenham are the best side in north London but admitted they are “light years ahead” of Arsenal.

Spurs sit in second place while their local rivals are down in fifth, and their 2-0 victory in April confirmed that the White Hart Lane club would finish ahead of the Gunners for the first time since 1995.

While Mauricio Pochettino’s side have been able to replicate their title fighting form from last season, Arsene Wenger has struggled to get the best out of his players despite finishing second last season.

Now, Arsenal supporter Morgan has had to concede that North London is white, not red, and that it looks set to stay that way for the foreseeable future.

He told talkSPORT: “”There is no doubt if you compare Pochettino to Wenger, compare that Spurs team to the Arsenal team, they are light years ahead of us.”

Morgan has often been involved in trolling Spurs fans, including mocking their side on his official Twitter account after their FA Cup semi-final defeat to Chelsea, which will make his current comments surprising to fans.

He compared the current Spurs side to the ones built up by Arsene Wenger during his first decade at the club, which saw a domestic double in his debut season and the famous ‘Invincibles’ side.

However, the 52-year-old has said he believes that the silverware will be heading to White Hart Lane rather than the Emirates, despite Wenger guiding his side to a FA Cup final.

“Tottenham looked to me like the tall, powerful, fast-moving team that Wenger produced in his first eight, nine years,” he told talkSPORT.

“I think they will win trophies. It is exciting times for them.”

Arsenal meanwhile are in a fight for fourth place, and travel up North to take on Stoke on Saturday.