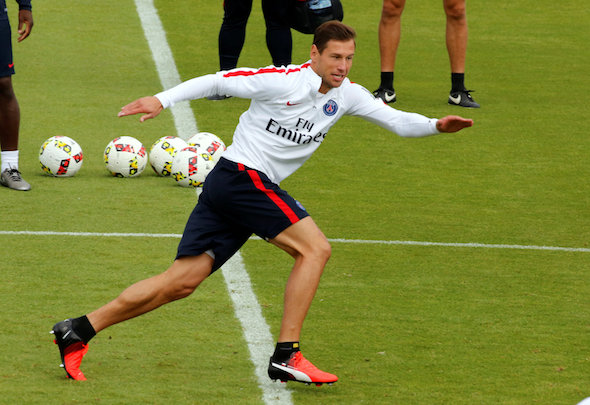 West Brom are in talks to sign Paris St. Germain midfielder and West Ham target Gregorz Krychowiak, according to a reliable journalist.

Gambling Times reporter Graeme Bailey claimed on his personal Twitter account on Wednesday morning that the Hammers and Arsenal had taken a look at Krychowiak, 27, earlier this summer.

West Brom in talks with PSG for loan for Grzegorz Krychowiak – Arsenal and West Ham were keen before and could come again.

It is now understood that the two London rivals could come back in for the 45-times Poland international at this late stage of the transfer window with Premier League rivals West Brom in pole position to secure his signature.

Sky Sports has reported that the Baggies are in advanced talks to sign the PSG midfielder on a loan deal and the player himself took to his personal Twitter account on Tuesday night to post a cryptic message which suggests that he is close to securing a transfer.

It is understood that the former Sevilla star is set to jet out to the West Midlands on Wednesday to sign for West Brom, but this latest report suggests that there could be a further twist in the tale.

After the disappointment of the failure to land William Carvalho, West Ham need to add an extra layer of cover to their defence. They have conceded 10 goals in the opening three Premier League fixtures – a stat which is unacceptable. The Irons’ backline isn’t good enough but their midfield doesn’t help. Krychowiak is a player who can win matches with the way he blocks the opponents attack and then works as the perfect playmaker to spark a counter move. That is why he fits the West Brom system perfectly. Tony Pulis’ side have conceded just one goal in their opening games and Bilic needs to try and take a leaf out of their book.

In other West Ham news, the Hammers have jet out on a transfer mission to cast their rule over this Champions League defender.