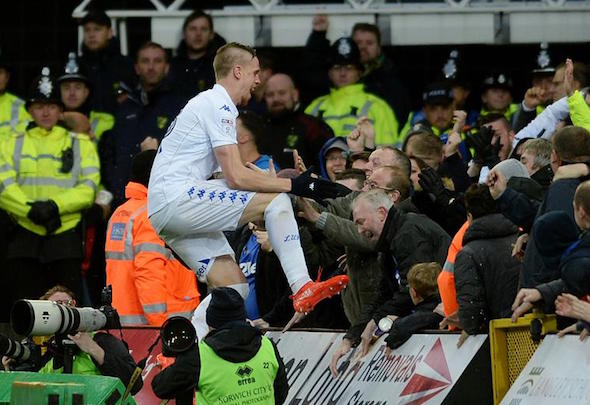 Pontus Jansson expressed his pride on Twitter after scoring his first goal for Leeds on Saturday.

The Swedish defender inspired Garry Monk’s side to a stunning 3-2 win against Norwich in the league on Saturday.

With the Yorkshire giants 1-0 down, Jansson scored the equaliser after 57 minutes with a superb header direct from Pablo Hernandez’s corner.

It was the Sweden international’s first goal in his 12th match for Leeds and increased his already high standing among supporters of the Championship side.

Further goals from Chris Wood and Hadi Sacko secured a famous win for Leeds to maintain the feel-good factor at Elland Road.

Jansson revealed on his personal Twitter account in the immediate aftermath of the match that he was “very happy” and “very proud” to score his first Leeds goal and added that he was part of a “fantastic team”.

I’m very happy and very proud to score my first goal for this club! Also proud to be a part of this fantastic team! pic.twitter.com/OJ78lHdD19

Jansson, who joined Leeds in the summer on a season-long loan from Torino, has emerged as a key member of the side after leapfrogging Liam Cooper in the centre-back pecking order at Elland Road.

Yorkshire Evening Post journalist Phil Hay was blown away by the latest in a series of outstanding performances from the 25-year-old.

He described Jansson on his personal Twitter account as a brilliant summer signing and said, “God knows what he’s doing in this league”.

Tactics and attitude spot on. Sacko sub helped turn the game. What a signing Jansson has been. God knows what he’s doing in this league.

Leeds’ seventh win from 10 league matches, and their third in a row, lifts them to sixth place in the Championship and into the play-off positions for the first time this season.

In other Leeds news, a senior player is destined to leave the club in January.