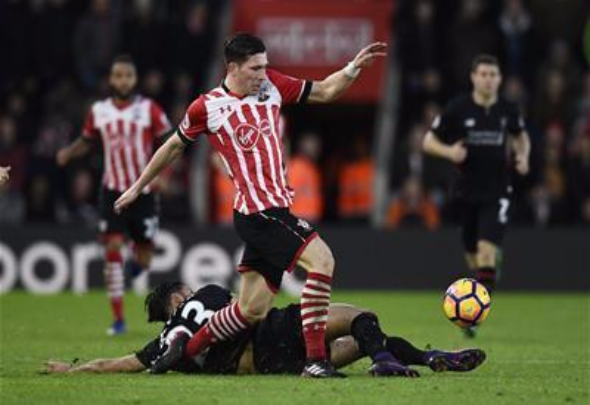 Southampton midfielder Pierre-Emile Hojbjerg was full of praise for Liverpool after his side earned a hard fought 0-0 draw on Saturday.

The Reds were held on the south coast over the weekend in a match which saw them finish with 66% possession, 15 shots to the Saints’ three and eight corners.

Denmark international Hojbjerg, who started and played 78 minutes of the fixture, made the huge claim after the match that Jurgen Klopp’s team were the best team he’s ever played.

“It’s not only that they move the ball quickly,” said Hojbjerg to the official Southampton website. “They also have fast players, and with the ball they are very good one against one.

“I played in Germany against Bayern Munich and Dortmund, I played against Manchester City in the Champions League, but I must say this is maybe the best team I have ever played against.

“It’s unbelievable how they move, how they stand, how they work together – it’s like a symphony.

“We should be happy with the one point, but it’s not that I say this is not our level. We can come up here and we have something to say up here and we showed that today.”

The summer signing’s comments were astonishing given his Bundesliga history.

Liverpool were knocked off of the top spot in the Premier League table on Sunday evening with Chelsea winning their sixth consecutive league match with a 1-0 victory over Middlesbrough, going a point clear.

Both the Reds and the Blues have the advantage of not playing in Europe this season and they will both be looking to go all out for the title following disappointing last campaigns.

The two sides already met in October this season, which saw Liverpool earn a 2-1 victory and they are set to meet again in January at Anfield.

However, before then Klopp’s team will be preparing for a clash against relegation battling Sunderland before taking on Championship outfit Leeds in the EFL Cup quarter final stages.

In other Liverpool news, fans reacted on Twitter to Chelsea leapfrogging them in the league.