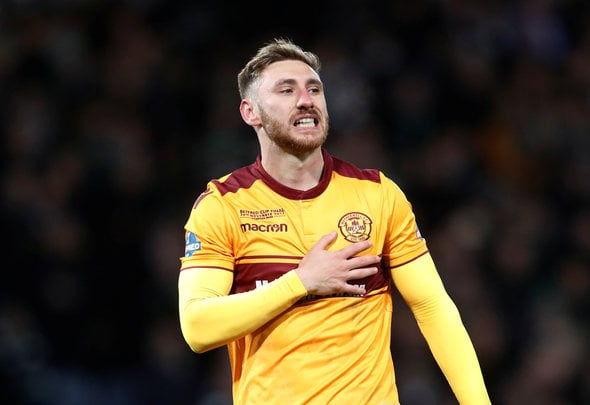 Rangers and Celtic target Louis Moult is on the verge agreeing a January transfer to Preston, according to reports.

The Scottish Sun claims that Motherwell forward Moult, 25, has been persuaded to sign a pre-contract with Preston in the January transfer window and “will” complete a move to Deepdale.

The Lancashire Post has reported that Rangers and Celtic both had Moult on their radar, as well as other English Championship sides.

Moult’s deal at Fir Park is due to expire at the end of the season, meaning that he can agree a pre-contract elsewhere when the transfer window opens in January.

It is understood that the prolific Scottish Premiership goalscorer is now close to finalising a move to Preston, whose manager Alex Neil has talked him into agreeing a deal to transfer.

The English striker has been in stunning form this season, scoring 14 goals in 22 appearances across all competitions.

Last campaign the ex-Wrexham hitman was just as prolific in front of goal, finding the net 18 times in 34 matches in all contests.

Moult has proven himself to be a very capable striker in his time at Motherwell and will leave a massive void in Stephen Robinson’s side going into the second half of the season. Rangers really could have done with the striker, especially as there is no one in their side who has been able to score consistently this term with Alfredo Morelos going off the boil. Celtic may also be facing the prospect of losing Moussa Dembele and with Odsonne Edouard on loan, Moult could have been a decent replacement or back-up. It remains to be seen how well Moult will perform in England, but if the form of the likes of Barrie McKay, Joe Garner and Martyn Waghorn are anything to go by, he should do just fine.

In other Celtic news, the Bhoys are facing a January scrap for this enforcer after a Premier League side makes a fresh check on him.