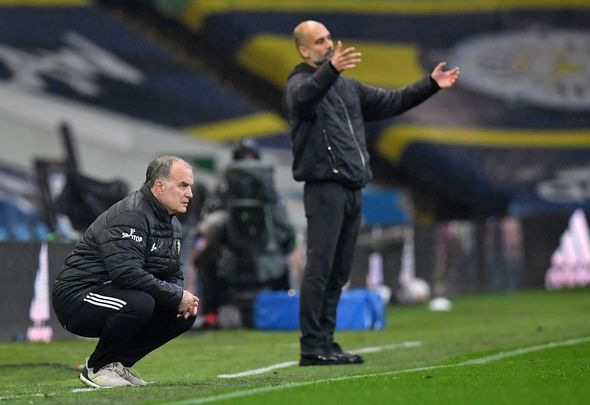 Speaking exclusively to Football Insider assistant editor Russell Edge, the former Spurs and England forward said the fact the 65-year-old only has a one-year contract could make the Whites vulnerable to losing him.

The Yorkshire giants only announced the day before the Premier League season began that Bielsa had put pen to paper on a new contract.

The two-year deal he signed when he joined the club in June 2018 with the club expired in the summer but Bielsa continued to be in charge at Elland Road.

He has earned rave reviews for his work with the club which culminated in them winning the Championship title last season.

They have also started this season impressively with eight points from four games including a draw with Pep Guardiola’s Manchester City.

But Bent believes this will only make him more attractive to rivals.

He told Football Insider: “With Bielsa, it’s an interesting season for Leeds.

“Depending on what happens with Pep at Manchester City and a few other top jobs, I think Bielsa who has only signed a one-year deal, a lot of teams at the end of the season not even depending on how Leeds do, they may look at Bielsa and go ‘you know what, this guy with the quality of player that we’ve got he could take us to another level as well.’”

“So it’s a really interesting season for Bielsa and for Leeds.”

Ahead of Man City’s game with Leeds, Guardiola said Bielsa was the person he admires the most in world football.

He also claimed: “He is the most authentic manager in terms of how he conducts his teams. He is unique. Nobody can imitate him, it’s impossible.”

In other news, Football Insider sources have told us that Leeds United staff and players have been blown away by an ‘Unbelievable’ 2020 signing in training.