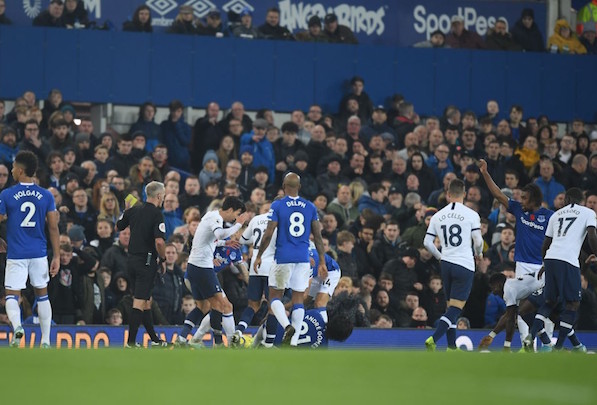 Martin Atkinson is expecting Tottenham to win their appeal against Son Heung-min’s dismissal at Everton on Sunday, which led to Andre Gomes’s horrific injury.

That is according to his friend Noel Whelan, who exclusively told Football Insider how the referee knows he got it wrong by handing Son a red rather than a yellow card.

The South Korea tripped Gomes in the 79th minute of the 1-1 draw, sending him crashing towards Serge Aurier with horrendous consequences and Atkinson initially reached for his yellow card.

Yet the long-serving match official upgraded his decision to a straight red when he realised how severely Gomes had been injured and it has left Son facing a three-match domestic ban.

“I know Martin Atkinson very well and he knows he got it wrong,” Whelan told Football Insider. “It was not a sending-off offence. It was a difficult one for him, and the injury and emotion surrounding it was massive in him changing from yellow to red.

“The break didn’t happen as a result of Son’s tackle, but the body landing on top of him.

“There are always freak accidents in football and I was involved in the famous David Busst injury at Coventry City that left him with two bones sticking out of his leg and him in a pool of blood in the middle of the pitch.

“I can understand why the players reacted the way they did but Martin should not have given a red card just because he sustained a horrible injury. That’s not justification and it should be rescinded. I expect it will, and that’s what Martin will expect, too.”

The Premier League explained that Son’s red card was “for endangering the safety of a player which happened as a consequence of his initial challenge”.

The attacker has been left distraught at his role in Gomes suffering a fractured dislocation of the right ankle.

The Portugese midfielder underwent surgery yesterday and Everton insisted he would make a full recovery.

In other Tottenham news, it can be REVEALED that Pochettino is planning to rebuild the Spurs defence around player who will cost ANOTHER £14million.