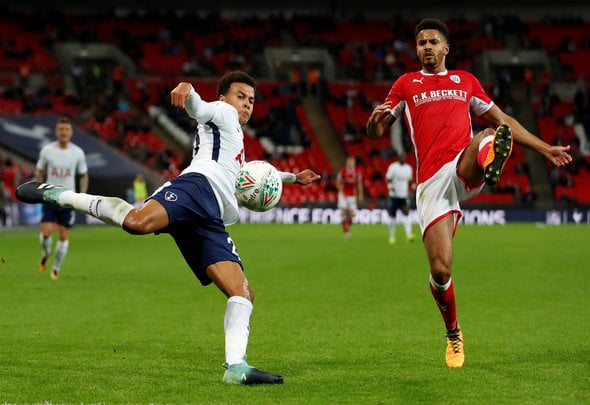 Tottenham midfielder Dele Alli must improve his consistency if he is ever going to get a move to a major European club according to Sky Sports’ Sunday Supplement panel.

The 21-year-old has already scored three goals across all competitions this season, and was on hand to provide an assist for Harry Kane in their side’s 3-2 win away at West Ham on Saturday.

However the attacking midfielder was guilty of passing up several good opportunities to test Joe Hart in the Hammers’ goal, while he was also dispossessed numerous times by their defence.

As a result of his hit-and-miss performance, the Sky Sports panel have said that despite the youngster’s flashes of magic on the ball, he must demonstrate more consistency and remove errors from his game if he is to reach the very top.

Speaking on Sunday Supplement (Sunday, 24/09, 09:30) on Sky Sports Football, the Daily Telegraph’s chief sports writer Paul Hayward said: “Too often things stop when they get to him.

“His game has slightly stalled in a way. He is capable of these magic moments and he makes a huge contribution to the team, but I don’t think he quite efficient enough yet.

“He is going to have to eliminate that from his game if he is going to get a move to Real Madrid. They won’t tolerate that.”

Hayward’s mention of the Spanish giants comes after a report from the Mirror claiming that agents were looking to offer him a move to Spain or even Manchester United.

Meanwhile Steve Bates, the Sunday People’s chief football writer, says that Alli should look towards his fellow club and country team mate Kane for inspiration.
“The best way for Dele Alli to get a move is to play the way Harry Kane plays,” he said on Sunday Supplement.
“Kane has shifted his game up to a different level now. I watched Alli play yesterday, and yes he was involved in a couple of goals, but he wasn’t really convincing.”
Alli will play no part in his side’s Champions League clash with Apoel Nicosia on Tuesday evening as he serves a three match European suspension.
In other Tottenham news, the club have reportedly lined up a 23-year-old as a replacement for Harry Kane.
We’ve launched a << BREAKING NEWS FEED>> exclusively for your club. ‘Like Us’ on Facebook by clicking here if you want 24/7 updates on all Tottenham breaking news.