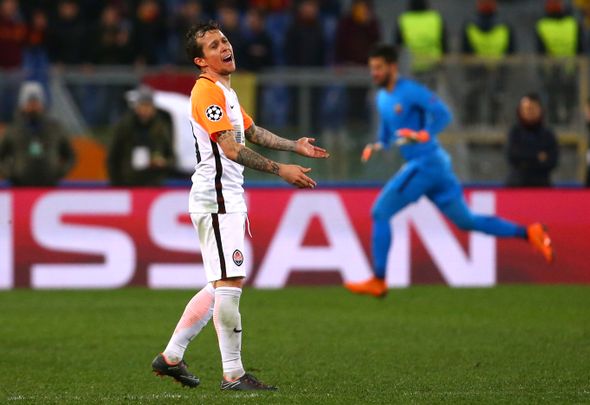 Some West Ham supporters took to social media in order to share their opinion on the club reportedly being interested in signing Brazilian winger Bernard.

It was claimed by journalist Alfredo Pedulla on his official website  that the Hammers had been in contact with some intermediaries for Bernard as Manuel Pellegrini was keen to bring the 25-year-old to the London Stadium.

Bernard, who has 15 caps for Brazil, is set to be available on a free transfer this summer as his contract with Shakhtar Donetsk is set to expire at the end of June.

A section of Hammers supporters responded in a positive manner after reading that their club were interested in the skilful winger with one claiming that it would be weird if the Hammers weren’t keen on Bernard.

Football Insider has rounded up a selection of tweets by Hammers fans about their club reportedly being keen on Bernard:

Bernard is quality and I don't know how Shakhtar are letting him go! Yes I'm well aware the board love a free transfer but it can be a good one too! Just hope he is.

If Bernard is the guy who just left Shakhtar (I’m guessing so), he’s the sort of player that hammers fans love and can see why he’d be a Lanzini type addition to the team. He’s very small (5”5) so hopefully he’d adapt and we could spend big elsewhere…

Love it & said type who would be on Pellegrini's radar only took a day!
Be great free for LW inverted or AM good age at 25.

We are always over a free transfer!!! Be weird if we weren’t.

It seems that Hammers fans are more than open to the idea of Bernard walking through the doors of the London Stadium this summer given there is no transfer fee required for his services. It would see most of the positivity from supporters stems from the fact that would be less of a risk to sign as their club won’t need to spend millions getting him. However it’s worth noting that Bernard will no doubt demand a lucrative pay packet in order for his services to be bought this summer. The 25-year-old knows that after a decent 2017/18 campaign where he made 29 appearances for Shakhtar Donetsk he will have a host of clubs trying to get him. This means that the Brazilian can demand a huge wage and signing on fee from his potential new club as he knows that there probably is a club in Europe willing to spend a huge chunk of their pocket change on him.

In other West Ham transfer news, the club have reportedly been in contact with a Brazilian winger whose contract is set to expire.