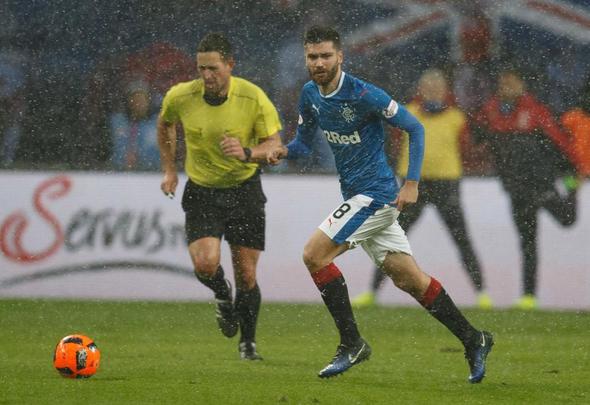 Jon Toral is aiming to return from a rib injury in Rangers’ trip to Partick on Sunday, but admits that it may be too soon for him to fully recover.

The 22-year-old has missed the last two matches, both against Celtic, and is keen to ensure that he plays again for the Light Blues before his loan deal expires at the end of the season.

Toral moved to Ibrox in January after agreeing a temporary switch from Premier League club Arsenal.

He’s made 12 appearances for Rangers in all competitions, scoring two goals and supplying three assists.

If Toral can return to action at Firhill Stadium, it could be a big boost for Pedro Caixinha as his squad has been ravaged by injuries in recent weeks.

“We don’t know exactly how long I’ll be out for, it’s bruising so it should settle down with time but being on the ribs it needs a bit of time. It is not easy to treat but the physios are doing their best,” said Toral on the official Rangers website.

“I hope I will play for Rangers again, that shouldn’t be a problem. I will do my best to make it for this weekend but I’ll have to wait and see how the injury progresses this week and see day by day where I am.”

The Spanish midfielder has not played a league game since he scored in the 2-0 home win against Partick in mid-April.

He spent the first half of the season on loan at La Liga strugglers Granada, who are now under the charge of Arsenal legend Tony Adams.

Toral has never played a minute of senior competitive football for the Gunners and has regularly been sent out on loan.

In other Rangers news, Kris Boyd has delivered a cutting claim about the club’s summer transfer dealings.