Rangers striker Eduardo Herrera is set for talks with the club about terminating his contract after Steven Gerrard dismissed the possibility of him returning to the squad, Football Insider understands.

The Glasgow giants hope to reach a settlement with the Mexican striker, 31, over the final six months of his deal.

Gerrard revealed earlier this week he has no plans to re-integrate Herrera into his team and Ibrox sources have told Football Insider that the striker “has played his last game for the club”. 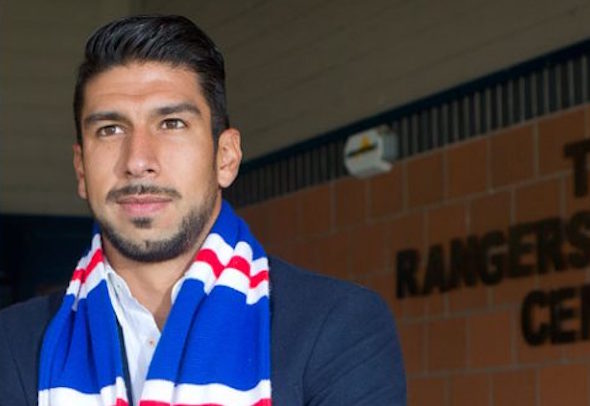 He is currently on loan at Mexican outfit Club Necaxa in a deal that is set to expire at the end of this month.

Rangers are keen to get Herrera off their books just as they did with his fellow Mexican flop, Carlos Pena, whose deal was terminated in February with 16 months remaining on his original three-year contract.

The senior of the north American duo has six months remaining on a contract believed to be worth around £20,000-a-week.

Rangers are willing to explore paying up a portion of the cash that he is due rather than have him kicking his heels at their Auchenhowie headquarters.

Rangers revealed in their most recent financial results they had spent £1.6million on paying up contracts of players for the year ending June 2019.

It will fall to director of football Ross Wilson to negotiate the exit of Herrera and try to stem what could be another potential £500,000 bill for the club.

Herrara scored just two goals in 24 Rangers appearances during his campaign at the club before being loaned out twice, to Santos  Laguna in the first half of last season and then at Club Necaxa in the new year.