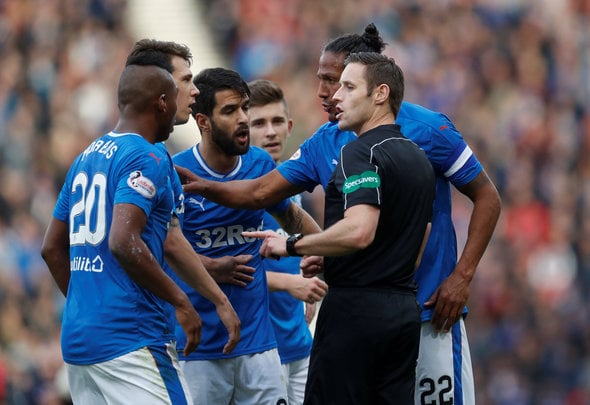 Rangers have launched a blistering attack on the Scottish FA after they offered Ibrox defender Bruno Alves a two-match ban for violent conduct during Sunday’s Scottish League Cup semi-final.

Alves was cited by the SFA’s compliance officer Tony McGlennon after he kicked out at Motherwell’s Louis Moult late in in the 2-0 Hampden defeat.

Moult also took a kick at the veteran Portuguese defender however the SFA’s compliance officer has deemed that act of violent conduct not worthy of review.

Rangers’ hierarchy are furious that the SFA have only cited Alves and have blasted the decision as “devoid of credibility and balance”.

“Rangers are shocked by this decision,” a spokesman for the club said in a lengthy statement, as quoted by The Rangers Observer Twitter account.

“In the minds of all fair-minded followers of football it will be seen as devoid of credibility and balance.

“Rangers are not seeking to make excuses for losing the match. Motherwell played to the referee’s whistle. That is their right but there were many aspects of the match which cause concern, both for player safety and the way in which we want to encourage players to play the game.

“We do not seek to personalise our criticism.

“The officials have to be respected, even where we might dispute the decisions that they reach.

“We do, however, have several players injured after the game – one seriously.

“Yet, this decision has singled out only one player – a Rangers player – for punishment.”

Rangers now face missing Alves for the trip to Murrayfield at the weekend to face Hearts unless the SFA hold off on hearing his case until next week.

With Fabio Cardoso already out of tomorrow’s clash with Kilmarnock at Ibrox and possibly missing the Hearts game, Pedro Caixinha could have some serious selection problems in defence.

Ross McCrorie and Danny Wilson would be the likely choices to replace them.

Wilson has only recently returned to fitness and appears to have fallen behind McCrorie in the pecking order.

Aidan Wilson and David Bates could also come into the reckoning for the Gers.