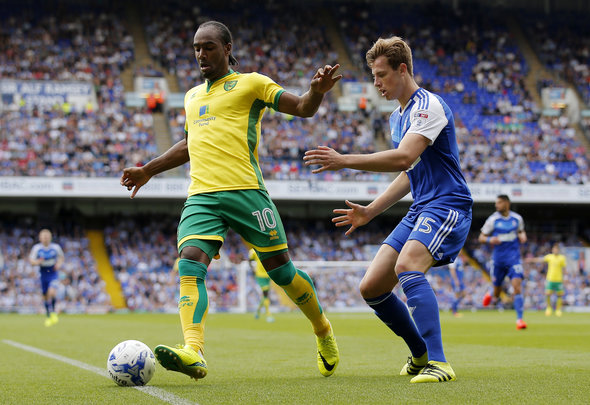 The transfer window is now officially open and Rangers director of football Mark Allen should be working tirelessly alongside Graeme Murty to try and strengthen the first-team squad.
In order to push for a second-placed finished in the Scottish Premiership after the winter break there are one or two areas that really need to be improved to get the better of the likes of Aberdeen, Hibernian and perhaps Celtic.
The Sun has reported that Norwich forward Cameron Jerome is available for a cut-price fee worth £1.5million in January – and that is something Rangers should be on top of in the coming weeks.
The Glasgow giants must join the race to sign up the former Premier League forward, who used to play for Birmingham and Stoke.
It is understood that Birmingham are interested in re-signing the 31-year-old striker, as well as Cardiff, Derby and Sunderland.
Jerome has bags of experience from the Premier League and Championship but it is reported that Norwich are considering letting him go this month to free up some of their wage budget.
For £1.5million, the powerhouse striker should one of the main targets that Allen and Murty look at this month, especially because his height and strength will make him the perfect partner for Alfredo Morelos.
Jerome is great in the air and it was evident against Celtic on Saturday that Rangers needed someone to get on the end of Daniel Candeias and James Tavernier’s impeccable crossing.
In other Rangers news, a seven-figure price-tag has been slapped on the head of this stylish enforcer wanted by the Gers and bitter rivals Celtic.
We’ve launched a << BREAKING NEWS FEED>> exclusively for your club. ‘Like Us’ on Facebook by clicking here if you want 24/7 updates on all Rangers breaking news.