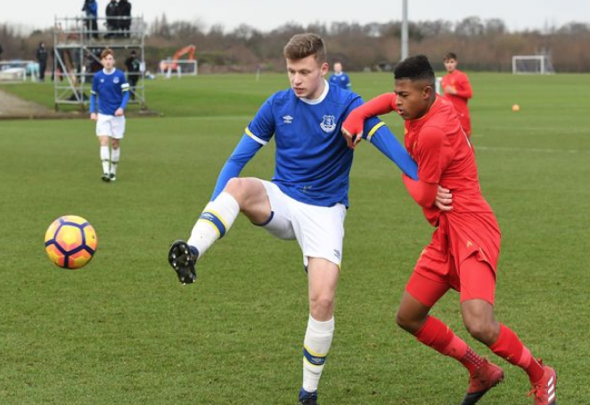 Rangers want to sign Everton wonderkid Alex Denny, according to a report.

The Liverpool Echo claim that the 18-year-old midfielder, who has impressed in the Under-23s and made his first-team debut with a short cameo in the Europa League tie against Apollon Limassol, was expecting a new Everton deal on the back of his success.

However, talks have reportedly stalled and the two sides are now at an impasse – something that Rangers are hoping to take advantage of.

Denny is keen on staying with Everton but the Echo claims they could lose the talented youngster unless a deal is reached.

Rangers have been reportedly looking at plenty of youngsters from Liverpool, with Steven Gerrard’s connections drawing the obvious links, but this has come out of the, ahem, blue. Denny might not excited Rangers fans as much as players like Harry Wilson and Ben Woodburn, but the young midfielder is a real talent who was rewarded last December with his senior team debut. Admittedly, Everton were a shambles of a club back then and in the middle of a disastrous Europa league campaign, but Denny, an England youth international, has been with Everton since the age of 11 after joining from Man City, and they won’t want to lose him. It seems strange that a player that wants to stay with a club who want to keep him is having problems brokering a deal, but if Gerrard could steal in and deliver a poke in the eye to his Liverpool rivals, it would be a coup for Rangers.