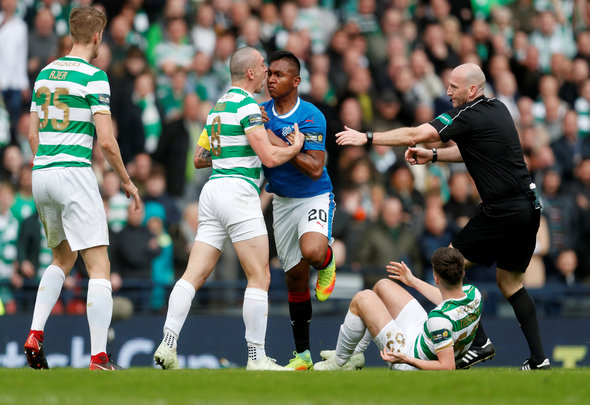 Rangers striker Alfredo Morelos has been the Light Blues top goal-scorer so far this season with 18 strikes to his name so far – but the Gers need to sell the Colombian and use the funds to revamp their squad.

The 21-year-old attracted bids from Chinese Super League Beijing Renhe at the start of the year and the Light Blues should go back to the Chinese in the summer and find out if they are still interested in the former HJK Helsinki striker.

After Sunday’s Scottish Cup debacle against Celtic, there is major surgery required on the Gers squad and with Morelos being the most sellable – and profitable – asset available to move on then the Colombian needs to go.

Morelos’ form has nosedived in recent weeks and the striker found himself getting involved in unnecessary scuffles during the 4-0 thrashing by Celtic before a post-match altercation reportedly took place between the striker and team-mate Greg Docherty.

Whoever takes over from manager Graeme Murty could have a huge task on his hand with a number of players doing their standing considerable harm with atrocious performances at Hampden.

Morelos has areas where he needs to really improve but has all the tools to be a top striker if he continues to work and develop but, despite impressing during his debut season in Scotland, the Colombian needs to be sold and the money used elsewhere to improve the team before Celtic reach a record tenth successive title.