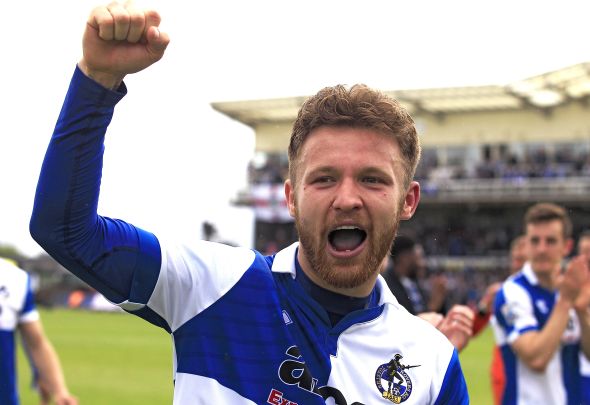 Rangers are set to enter a four-way tussle to sign Bristol Rovers striker Matty Taylor, according to a report.

The Scottish Sun claimed that the future of first-choice forward Martyn Waghorn has plunged into doubt as he becomes unhappy over his current contract situation.

With Waghorn unsettled, the Scottish Sun have also claimed that Rangers manager Mark Warburton is set to enter the market for Taylor who has a release clause of less than £1million.

The Gers have been put on red alert, after Rovers chairman Steve Hamer revealed that Taylor will leave if the price is right.

“If there is a deal on the table that is good for the football club and good for the player then it is something you have to consider if and when that situation arises,” Hamer said, as quoted by the Sun.

“But Matty has recently signed a new contract and selling him in the January window is the last thing on our minds at the moment.”

However, Warburton’s side will face competition as Championship trio Cardiff, QPR and Brighton are also interested in signing the League One goal machine after a superb spell of form in front of goal.

Taylor, 26, has scored 15 goals in 22 appearances for Rovers this season, after firing the club to promotion from League Two last year with 28 goals in 50 league and cup encounters.

A move for Taylor would be a shrewd piece of business by former Brentford boss Warburton, as Taylor continues to prove that he can score despite the step up in class this season. However, the Gers boss faces a huge task on his hands with Taylor likely to prefer a move to either of three Championship clubs as they can offer a higher wage. it is also worth mentioning that Rangers chiefs should consider spending their limited transfer budget on other areas other than in attack. Warburton has an abundance of strikers available to him at Ibrox, with Kenny Miller, Joe Garner, Joe Dodoo and Michael O’Halloran all looking to compete with former Leicester ace Waghorn.

In other Rangers transfer news, this striker is also on Warburton’s radar.