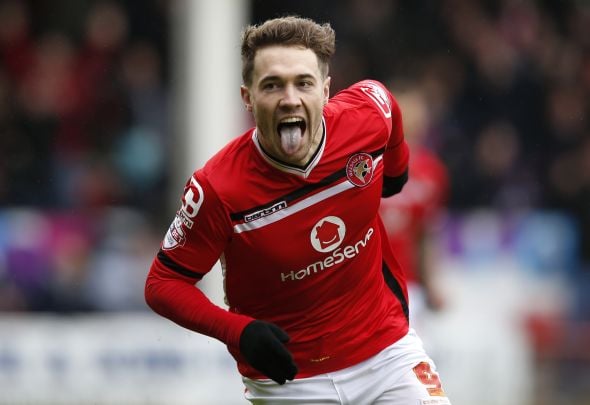 Rangers target Tom Bradshaw is available for just £750,000 this summer, according to a report.

The 23-year-old has entered the final year of his contract with his club Walsall and is reportedly being looked at by several English clubs including Reading, Preston North End and Birmingham City, as well as Rangers.

Bradshaw has bagged 20 goals in all competitions in successive seasons for the League One side and the Sunday Post claim Walsall have named their price for the prolific striker.

It is claimed an unnamed English club bid £450,000 for Bradshaw last summer, but with the forward refusing to sign a contract extension, Walsall are now thought to be ready to accept a fee £300,000 above that figure.

Bradshaw matched his league tally for last season with another 17 this campaign and his form earned him a call up to Chris Coleman’s Wales squad.

The striker may well have forced himself into Wales’ Euro 2016 plans had it not been for calf injury that forced him to pull our of the preliminary 29-man training squad.

However, Saddlers boss Jon Whitney is unconcerned with the prospect of losing Bradshaw and is adamant he can help another player become as excellent as his current top striker.

In other Rangers news, Celtic are set to beat the Gers to the singing of this Premier League striker.