Rangers will be happy that they are hosting Celtic in the first Old Firm clash of the season, according to Noel Whelan.

The former Leeds United striker, speaking exclusively to Football Insider, says that the two Glasgow giants look closer in quality than they have been for a number of years, heralding the impact that Steven Gerrard has had at Ibrox.

Celtic top the Premiership table on goal difference alone, with both the Hoops and the Light Blues winning their first three league games of the season.

Whelan says that those at Ibrox will be pleased they are hosting the first derby day of the campaign, tipping the Gers to push Celtic all the way in the hunt for the Premiership title this season.

Whelan told Football Insider: “I tell you what, it’s set up nicely. I don’t think we’ve ever had an Old Firm that’s going to be as tight as what it is right now, especially for the first one of the season.

“Really intrigued, Rangers will be happy the first one is at their place, at Ibrox. Puts a lot of pressure on (Celtic) because Stevie G is making Rangers a real force again and it’s nice to see there’s not just one team in the running for the league any more.

“I think Rangers might push them all the way to the end this season which is really exciting. Everyone gets hyped up, it’s massive, it’s a great atmosphere, it’s intense. You’ve got to manage the occasion.”

The two Glasgow rivals played each other four times last season, with home advantage playing a significant role as both sides won their two games in front of their own fans.

In other Rangers news, Football Insider can reveal that a number of English sides are keen on one of the club’s senior stars as bids are launched for his capture. 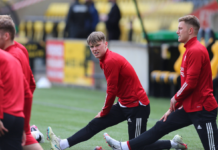