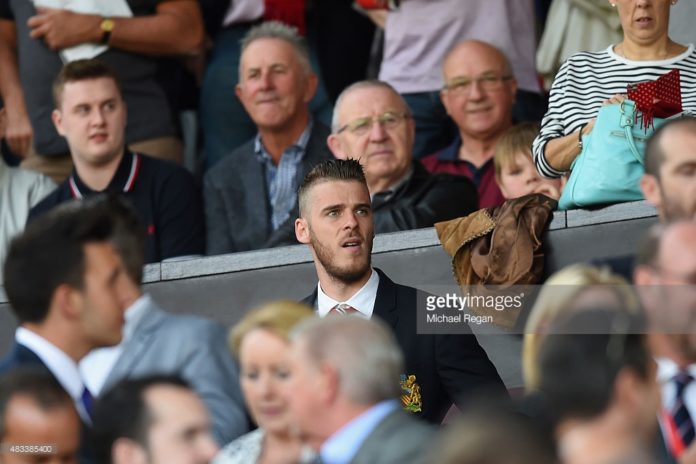 The Spaniards are expected to return with a new bid this week for the goalkeeper after Louis van Gaal challenged them to match Manchester United’s valuation of him.

The United manager’s public stance is that De Gea could yet stay at Old Trafford for another year despite ruling the 24-year-old out of his plans until the transfer window closes because he is not in the right frame of mind.

But Van Gaal has told allies that De Gea has become an unwelcome distraction within the club and the best outcome for United is to sell him to Real for the maximum fee.

The Spanish giants are convinced they will have signed De Gea by 22 August, which is the day the new La Liga campaign starts.

United are holding out for £30million for De Gea but, as revealed by Football Insider last month, do not expect him to be at Old Trafford beyond the summer window.

With the two superpowers refusing to budge, stalemate has ensued but United accept that the best option for all parties is that De Gea leaves.
Speaking after United’s 1-0 Premier League victory over Tottenham on Saturday, Van Gaal accepted that the deal is down to how much Real are willing to pay.
He said: “We have to pay a lot of money for all the players we want, and we want the same level when we have to sell.

“We want to keep him of course but I’m not the most important part, that’s the player and the club who want to buy him. He’s been our best player for two years or three years so we cannot let him go so easily.”

Asked if he can see De Gea playing for United again, Van Gaal replied: “Of course. But the position of goalkeeper is the one that needs the highest concentration and focus during 90 minutes. When you are in circumstances like David de Gea, it’s difficult to accomplish that.

“We observed him against Barcelona and Paris Saint-Germain, and it was not the same David de Gea as last year. He also felt like that. After September 1 we will look at him.”

The Spain international has agreed personal terms with Real and, although the two clubs have not agreed a fee, he has his heart set on a return to Spain with one year remaining on his United contract.
The goalkeeper told United at the end of last season that he would not sign the £220,000-a-week contract offered by the club and that he wanted to join Real.