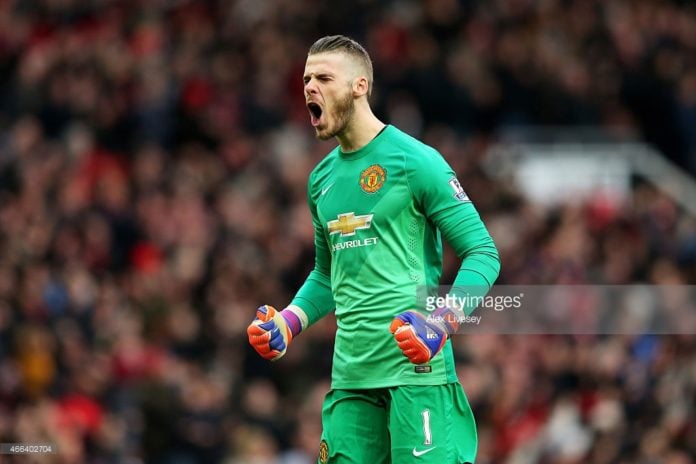 The 24-year-old goalkeeper is a long-time target of Real and they have now stepped up their bid to lure him from Old Trafford.
The Spanish giants have not yet tabled a bid for De Gea but United are bracing themselves for a formal move once he returns from international duty following Spain’s Euro 2016 qualifier against Belarus on Sunday.
Informal discussions have already taken place between the two clubs over the transfer fee and the structure of the deal, with super-agent Jorge Mendes mandated by Real to broker De Gea’s now inevitable move to the Bernabeu.
The Premier League club are resigned to losing their player of the season although they will hold out for a £25m fee.
With reports in Spain claiming that De Gea has already agreed personal terms with Real, there is confidence at the Bernabeu that the deal can be completed by the end of the month.
United manager Louis van Gaal has admitted that his club are identifying replacements for the former Atletico Madrid man, with Hugo Lloris of Tottenham, Petr Cech of Chelsea and Samir Handanovi of Inter Milan believed to be among their targets.
Real have identified De Gea as Iker Casillas’ successor, with the long-time Bernabeu No1 expected to leave the club this summer.

United fear they have lost the battle to tie De Gea down to a deal that extends his contract beyond the summer of 2016. He has rejected a string of offers, with the latest believed to be worth a basic £220,000-a-week plus top-up bonuses.
Speaking last month, Van Gaal admitted that United have begun the process of considering replacements for De Gea in the event that he leaves Old Trafford this summer.
“We know who already shall be the next goalkeeper,” the Dutchman said. “We have a list of goalkeepers who can replace him because we have to be organised also, not only for that position but every position. We want him to stay so hopefully he shall sign.”