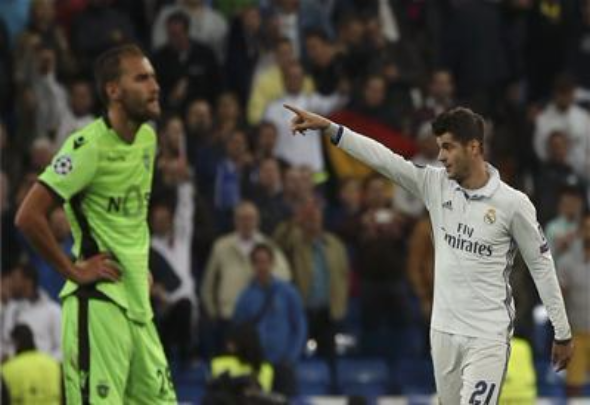 Real Madrid president Florentino Perez has admitted he would be willing to cash-in on unsettled striker Alvaro Morata, according to a report.

The 24-year-old has fallen out of favour at the Bernabeu this season, having started just nine of his 25 appearances in all competitions for Zinedine Zidane’s side.

The Sun reported back in September that both Arsenal and Chelsea were keen to sign the Spain international, who has been growing more frustrated at his lack of appearances since his return to the club from Juventus in the summer.

Meanwhile, Spanish newspaper Diario Gol reported on Tuesday that Real Madrid chief Florentino Perez has been left furious at Morata’s attitude, and has hinted that he would be willing to let him leave.

However, Perez admitted he would only consider offers of at least £51million for the player’s services, which might put-off many potential suitors.

He is believed to have told Morata: “If we get £51million you can leave tomorrow”.

Arsenal have been long-term admirers of the Spanish goalscorer.

Arsene Wenger declined the opportunity to sign him last summer, despite reportedly being told by Real Madrid that he could be available for just £38million.

But he could be tempted to re-ignite his interest in Morata, amid the ongoing doubts over the l0ng-term future of Alexis Sanchez.

Negotiations over a new contract at the Emirates have stalled and with less than 18 months remaining on his contract, Arsenal fans are getting worried.

If Sanchez were to leave in the summer, Wenger could turn to Morata to fill the void in attack.

Arsenal could land a very good player in Alvaro Morata, but unless Alexis Sanchez was to leave the club this summer, there is no real need to bring in another goalscorer. Olivier Giroud has also been impressive this season, while Danny Welbeck is now available once again following a lengthy injury lay-off. Then there’s Lucas Perez, who has not featured nearly enough since his summer move. Morata could be considered a better goalscorer than several of Arsenal’s current options, but they could do without the added competition for places – particularly if they are expected to splash out £51million to meet Florentino Perez’s valuation.

In other Arsenal transfer news, this player is set to spend another season at Arsenal despite concerns over his long-term future.