Noel Whelan was blown away by Luke Ayling in more ways than one as the Leeds United defender continues his great run of form.

Ayling opened the scoring with a sensational volley after just three minutes as the Whites beat Huddersfield Town 2-0 to go top of the Championship. 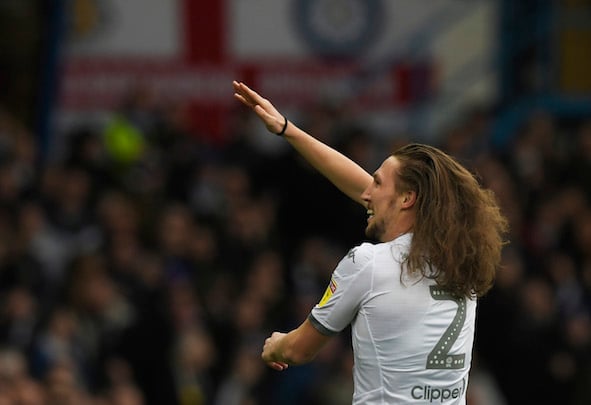 The goal was the right-back’s fourth in 28 appearances this season.

When asked for his assessment of the English full-back’s performance in the Yorkshire derby, Whelan told Football Insider: “Luke is on a right run of form. He is enjoying his football.

“That goal was something really special from the way we got the ball in our own half, out to the left-hand side but it is all about the work-rate. Nobody realises what it is like to do box-to-box for 90 minutes. You have got to be fitter than fit. His technique, his body shape – everything was perfect.

“He celebrated in style with the hair down and the air guitar. It is like Rapunzel and he really is sitting on top of the tower! He is on a real run of form.

“There was not a better goal in the Championship that weekend. The perfect way to start a Yorkshire derby.”

👏 With 51% of the vote, February's @PFA Fans' Player of the Month is… Luke Ayling! #PFAFansAward pic.twitter.com/q7J2epr5oc

Ayling was today voted the PFA Championship Player of the Month for February.

The victory puts Marcelo Bielsa’s side within touching distance of promotion. Six wins from the next nine enough to guarantee a return to the Premier League for the first time since 2004.

In other Leeds United news, Danny Mills has told Football Insider the club may use an unorthodox tactic to persuade Ben White to sign permanently.