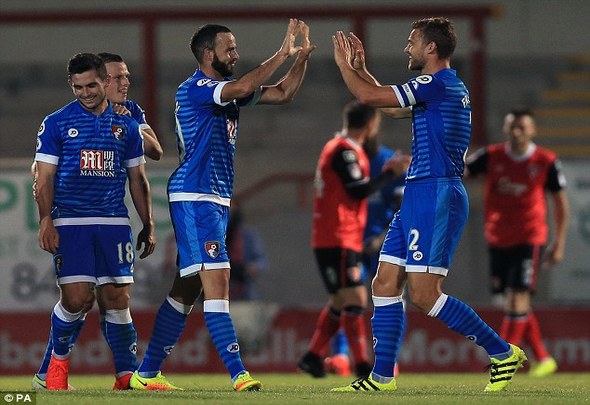 Leeds are “definitely not in” for Bournemouth defensive ace Marc Wilson this summer despite rumours, according to a reliable journalist.

There has been mass speculation over the past few days that the 29-year-old was a target for the Elland Road club following a report from Irish publication Balls.Ie stating “it is rumoured that Leeds United are favourites to land the defender.”

But, Yorkshire Evening Post writer Lee Sobot has been quick to dispel Leeds transfer rumours recently and on Friday he claimed via his personal Twitter account that Wilson was certainly not a target for Leeds.

Leeds are reportedly on the search for another new centre-back this summer following the signing of Matthew Pennington on loan from Everton.

Right now the club have each of Pontus Jansson, Liam Cooper and Pennington fighting for a centre-back position, but the loss of last season’s star Kyle Bartley, who returned to parent club Swansea after his loan spell at Elland Road has left a gap in the side.

The versatile Wilson would have offered plenty of experience to the Leeds team having played in 181 Premier League matches through his career, but he is now unlikely to be lining up at Elland Road next season after Sobot’s update.

Wilson’s name isn’t a household one, but then neither was Bartley’s and he proved a huge success in the Championship. The Irishman also boasts more experience than that of the Swansea man and the 25-time capped international could have been a solid signing this summer. However, Leeds also unearthed an unknown gem from Serie A last summer in Pontus Jansson and if the club can do the same this time around then they could be serious contenders for an automatic promotion spot in the next campaign.

In other Leeds transfer news, this attacker has agreed to quit the Whites and join a top-flight club.