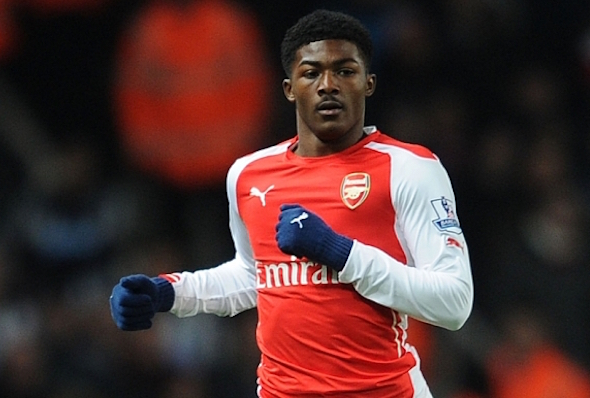 The young career of Ainsley Maitland-Niles is in jeopardy after his mother left an abusive voicemail on Mick McCarthy’s phone, according to The Sun.

The Arsenal winger, 18, has not played for his loan club Ipswich since his mother Jule is said to have left an expletive-ridden message last month.

The Sun report that the voicemail on manager McCarthy’s phone was prompted by Maitland-Niles’ appearance at an England kit launch.

The Football Association wanted the England Under-19 international to attend the function this month, but McCarthy wanted him to stay in Ipswich to prepare for a midweek match.

Jule then left a lengthy tirade on McCarthy’s mobile phone, the content of which was claimed to be so abusive and so threatening that the experienced manager decided to drop Maitland-Niles for the clash with Blackburn on 15 March.

He was subsequently left out of the team for the defeat against Rotherham at Portman Road on 19 March and has not made an appearance for the Tractor Boys since.

Arsenal have been made aware of the extraordinary incident and are said to be shocked by the nature of the message left on the Ipswich manager’s phone.

“Mick’s a Yorkshireman and he’s prepared to tolerate most things, but not something like this,” an Arsenal source was quoted as saying in The Sun. “The language was disgusting and so poisonous that it even shocked Mick. “He’s only ever tried to do what’s right for the kid and protect his career, but this is something new to him.

“He likes the boy and thinks he has potential to be a top player, but he’s worried that his mother is having a detrimental affect on his career.”

Maitland-Niles is highly thought of at Arsenal, for whom he made three senior appearances as a substitute last season, including one apiece in the Premier League and Champions League.

He had been a mainstay of the Ipswich side up until the middle of last month, scoring two goals and supplying three assists in 31 appearances for the Championship team.

Match of the Day presenter Gary Lineker has complained previously about parental behaviour.

“The competitive nature of most mums and dads is astounding,” the former England striker said. “The fear they instill in our promising but sensitive [youngsters] is utterly depressing. We need a parental cultural revolution.”