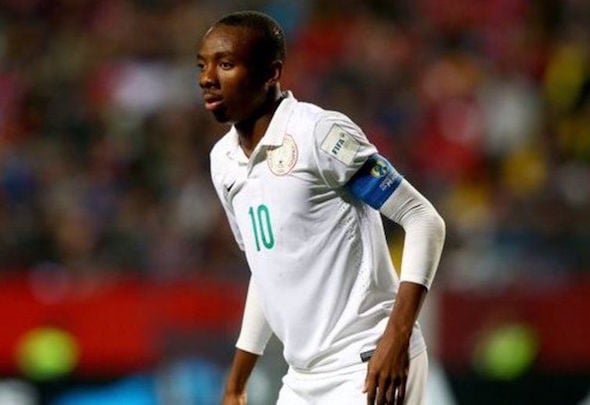 Arsenal are set to announce the signing of Nigerian under-20 captain Kelechi Nwakali after national team duties delayed his North London switch.

Nigerian football website All Nigeria Soccer claimed that his participation in the African Cup of Nations Under-20s prolonged confirmation of his move to Emirates Stadium.

However, the 18-year-old is finally set to put pen to paper after the Nigeria Under-20s were knocked out of the tournament by Sudan with a 4-3 defeat.

Nwakali and his entourage are scheduled to fly to London later this week.

The move was confirmed by Diamond Football Academy chief Emeka Amajiriaku, as a deal had been agreed in principle since March after Nwakali flew to North London to complete his move.

“Kelechi is leaving Nigeria between 30th and 31st of July, his ticket has already been booked,” Amajiriaku told All Nigeria Soccer. “He is in high spirits because he is joining Arsenal, he is one hundred percent fit.”

Arsenal were among a number of leading European clubs who scouted Nwakali in last year’s Fifa Under-17 World Cup in Chile, along with Man City and Bayern Munich.

Nwakali will join Holding, Asano and £35million man Granit Xhaka as Wenger continues to look for suitable additions to his Arsenal side.

In other Arsenal transfer news, the Frenchman could make a move for this La Liga defender after Per Mertesacker was ruled out until Christmas.