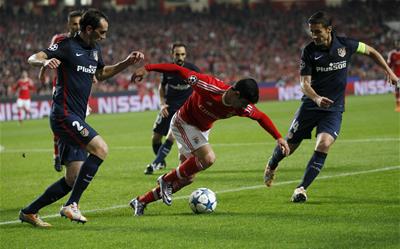 Arsenal manager Arsene Wenger is taking a close look at Benfica winger Goncalo Guedes, according to a report.

Portuguese outlet O Jogo claim that Arsenal are scouting the Benfica ace and could look to make a deal with the youngster as other European clubs show interest in his services.

The 19-year-old’s stock has risen after scoring the winner in Benfica’s famous Champions League victory away at Spanish giants Atletico Madrid last season.

Guedes made his international debut for Portugal in 2015, and has two senior caps to his name, putting him on the radar for a number of clubs.

The youngster made 25 appearances for Benfica last season, scoring four goals, as his club were crowned Primeira Liga champions by two points, beating rivals Sporting Lisbon to the crown.

It is not yet known what price Benfica will want for Guedes, but his current Benfica contract runs until 2021.

Wenger’s only major signing this summer to date has been Borussia Monchengladbach midfielder Granit Xhaka for £30million, although Wenger is being linked with a number of attacking options as the start of the Premier League draws near.

In other Arsenal transfer news, Arsene Wenger has opened talks with this German international, senior figures have jetted in for talks.