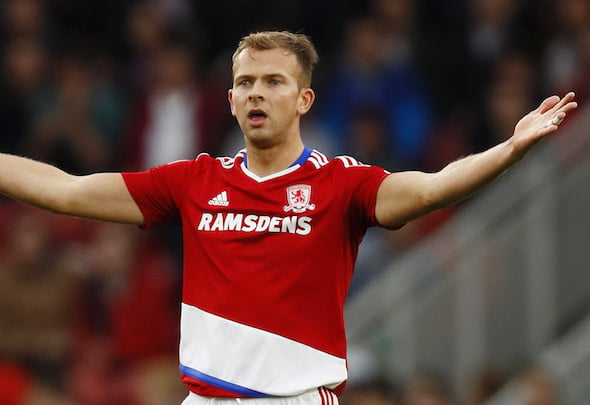 Aston Villa have reignited their bid to sign Jordan Rhodes from Middlesbrough, according to a report.

It is said that Premier League outfit Boro must lower their demands if a deal is to be sealed ahead of the deadline.

The Mail report Aitor Karanka’s side are holding out for £9million after rejecting a £6million bid from Villa earlier in January.

Another £3million will seal the deal for Rhodes but it remains to be seen whether the Midlands giants are willing to pay so much for a player who has not scored this season and has been on the fringes of the Boro team.

Bruce suggested on Monday morning that his side’s pursuit of the Scotland international was not dead in the water.

“We made a bid for him and we went as far as we could,” said the manager, as quoted by the Mail. “Nothing has changed, Whether that changes in the next 24 hours I’m not so sure.”

This comes after the Birmingham Mail reported that Villa had pulled the plug on their pursuit of lower-league specialist Rhodes and were looking at alternative forward options.

Ex-Blackburn and Huddersfield front man Rhodes has an outstanding record in the Football League, netting 91 goals in 189 Championship matches and 70 goals in 122 League One fixtures.

With Ross McCormack axed for failing to turn up to training, Jordan Ayew away on international duty and Jonathan Kodjia only just returned from the African Cup on Nations, Bruce was forced to turn to Gabriel Agbonlahor to lead the Villa attack in their most recent match.

Agbonlahor extended his goal-less run to a year following the 2-2 draw against Preston as it was left to winger Albert Adomah to lift the team’s meagre goal tally for their league campaign to 28 from 27 matches.

In other Aston Villa transfer news, this sensational striker transfer is set to be completed very shortly.