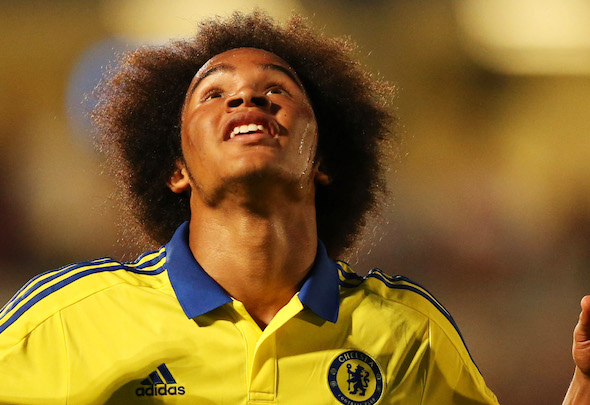 Chelsea winger Izzy Brown has agreed to join Brighton on loan for the upcoming season, according to a report.

The Argus newspaper claim that the newly promoted Premier League club have won the race to sign the attacker for the 2017-18 campaign.

It is said that Brown, 20, has agreed the terms of a new Chelsea contract and the paperwork has also been finalised on a second deal that will take him to Brighton on loan.

The Argus report that Brown will be announced as Brighton’s new signing today (TUESDAY) and the plan of manager Chris Hughton is to use him in tonight’s friendly at Southend United.

He has chosen the Seagulls over Huddersfield, who wanted him back after he helped them to promotion via the Championship play-offs last season.

The England Under-20 international, who can play in all three positions behind the main centre-forward, scored five goals in 21 matches for Huddersfield last season.

Quick, athletic and possessing immense potential, Brown could prove a valuable weapon to Brighton as they aim to stay afloat in their debut Premier League campaign. He will add an extra attacking dimension to a slightly one-paced front line and has the capacity to improve quickly once he gets accustomed to the unique rhythms of the top flight. Chelsea clearly rate him after tying up a new contract before sanctioning his temporary exit. Like Tammy Abraham and Ruben Lofuts-Cheek, Brown will get the chance to show his parent club what he’s got.

In other Chelsea transfer news,