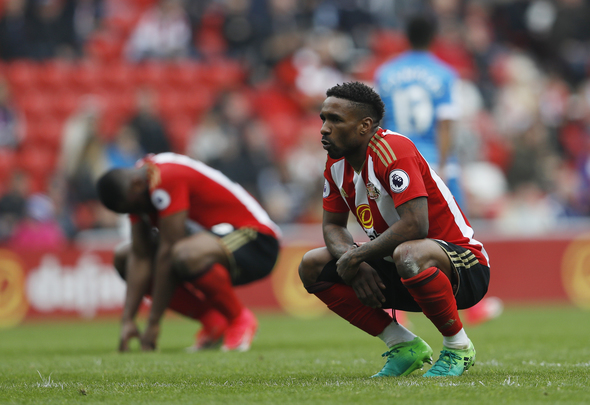 Bournemouth are the frontrunners in the race to sign Sunderland striker Jermain Defoe this summer, according to a report.

The Times claim that the Cherries are the most likely destination for the 34-year-old goalscorer this summer, after Sunderland were relegated from the Premier League.

It is said that Defoe has already spoken with team-mate Jack Wilshere and manager Eddie Howe about his future, and could be on course for a move to the south coast.

Defoe netted an impressive 15 goals for Sunderland this season, although his attempts to ensure the Black Cats’ survival proved to be in vain.

Sunderland’s relegation from the top flight means the experienced England international could be offered a way out of the club, with a number of clubs understood to be keen on his services.

West Ham hold significant interest, having endured their own struggles in the goalscoring department this term, and are in the market for a new striker.

The Hammers had multiple bids rejected for Defoe during the winter transfer window, but could be in line to re-ignite their interest after hearing of Defoe’s relegation release clause.

Sunderland chief David Moyes revealed last week that his star man had a release clause in his contract that allows him to leave the club on a free transfer this summer, following their relegation.

However, West Ham may struggle in their renewed attempts to land their man, with Premier League rivals Bournemouth understood to be best-placed in the race for his signature.

There is not likely to be a shortage of potential suitors for Defoe this summer, after he proved he can still perform at the top level week-in, week-out. West Ham could be considered the side perhaps most desperate for a goalscorer this summer, with their current attacking contingent often failing to hit the back of the net. However, Bournemouth will be looking to build on another successful season in the top-flight with a series of quality new additions, and Defoe would be a fantastic purchase. Josh King has proven a surprise hit at Dean Court this term, but with a potential move elsewhere this summer, Defoe would be an ideal alternative. Even if King were to stay, Defoe would be a player capable of working alongside him. But West Ham cannot afford to let him slip into the hands of rivals Bournemouth, particularly if the striker can be snapped up on a free.

In other West Ham transfer news, this 24-year-old has delivered an update on his future amid reported interest from Premier League heavyweights.